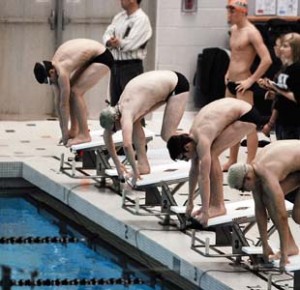 There wasn’t a shortage of excitement on Thursday, Feb. 12, as the Rockford and West Ottawa swim and dive teams walked onto the natatorium deck, both undefeated.

As bodies, arms, legs and water flew for more than two hours, the winner of the evening remained a mystery until the very last seconds of the meet. The concluding results, unfortunately, didn’t favor Rockford. The Rams lost to West Ottawa by the smallest of margins, 157-158.

“It was anyone’s meet,” said Coach Tom Parks. “Like Rockford, West Ottawa’s team has depth and a very talented bench. We upset West Ottawa in some key events, but they surprised us with major wins in others. Bottom line: it was a great effort by both teams.”

Throughout the meet, the overall score remained uncomfortably close. Many events ended with only a few hundredths of a second separating first and second place, such as the match-up between Max Olson of West Ottawa (49.92) and Tyler Augustine of Rockford (49.98) in the 100-yard freestyle. During the first three events, the Rams held a slight advantage of 12 points, but following the fourth event (50-yard freestyle), the score had dropped to Rockford 54, West Ottawa 51. From that point on, the score remained intensely consistent with only a slight difference. Throughout the last four events, West Ottawa and Rockford flip-flopped for the lead. Going into the final event, the 400-freestyle relay, Rockford was down by three points, 147-150. To win, the Rams had to place either first and second or first and third. The relay team of Augustine, Alex Devries, Andrew Sakala and Bryan Wasberg placed first, but West Ottawa’s deep bench of energized freestylers unfortunately out-swam Rockford for second and third places.

“Yes, there was a lot of speed demonstrated at this meet,” said Sakala. “West Ottawa’s team has gained a tremendous amount of depth, after losing only a few key seniors from last year. The Panthers are tough competition this year and will be a great challenge in the upcoming conference meet.”

The Rockford swimmers with state times were: 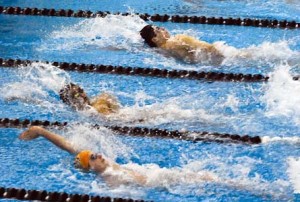 “Even though there were several of us who swam personal bests, at least six key players that I know of were sick or had missed school that week or the day before the meet due to sickness,” said Sakala. “I’m sure Coach Parks didn’t calculate that into his equation when he considered the lineup. I can’t imagine what the score would have been if Rockford was swimming 100 percent. I guess we will never know. Sickness could have plagued West Ottawa, too. Just the luck of the draw for Rockford.”

“There’s not a lot a coach can do about illness,” said Coach Parks. “I do commend these guys that they all still gave 100 percent. Unfortunately, 100 percent while ill isn’t the same as 100 percent while healthy. The good news is we will have another chance at a rematch with West Ottawa during the OK Red conference meet at the end of February. Let’s cross our fingers that illness will be behind us.”

“I thought I would never say ‘Go Bulldogs,’ but I hope Grandville wins for the obvious reasons,” commented Sakala. “However the season ends, our team has improved a vast amount. Freshmen swimmers, who I did not even know, rose to the occasion and swam incredibly fast. I did not expect our team to do even this well in the regular season. I am just glad that we have another shot at winning the conference meet and competing at state finals again.”