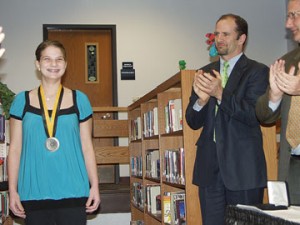 Courtney Fedeson knows the importance of sticking to a project until it’s finished. In this particular case, $1,000 and a trip to Washington, D.C. was the reward.

Courtney, a seventh-grader at North Rockford Middle School, was awarded an engraved silver medallion that signified her selection as one of Michigan’s top two youth volunteers for 2009 in the Prudential Spirit of Community Awards program. The ceremony took place at the school board meeting on Monday, March 9.

The award, sponsored in partnership with the National Association of Secondary School Principals (NASSP), is part of a broad initiative created by Prudential Financial to encourage young people to become involved with community service.

The award was presented by Douglas Kliewer, a financial planner and representative from the well-known insurance company. “We want to recognize the students who donate an insurmountable amount of hours for their community,” said Kliewer.

Courtney was honored for helping her Girl Scout troop lead a project that landscaped and beautified the front entrance of her school. They raised approximately $12,000 to fund this project.

“I think I understand now what a great community I live in; a place where people will pitch in and volunteer,” Courtney said. “All you have to do is take the initiative and act.”

Courtney was one of 104 other top honorees from across the country to win this prestigious award. She will join them in early May in Washington, D.C. for several days of national recognition events. Ten of them will be named America’s top youth volunteers for 2009 at that time.

Courtney’s father, Brian Fedeson, is extremely proud of his daughter’s accomplishments. “This is an impressive award. If Courtney wins one of the top ten, $5,000 comes back to the Rockford area to help area charities.”

Courtney plans on saving her $1,000 award for college. She wants to become a lawyer.

“I found out that I can make a difference,” said Courtney.