After Gerard Michael Coulombe allegedly robbed the Lake Michigan Credit Union on Ten Mile Road, he showed off piles of cash to his friends, bragged about the robbery, and even showed online pictures from the security camera as proof he did it.

In a federal complaint from the United States District Court in the case of Coulombe vs. the United States of America, a Federal Bureau of Investigation agent outlines Coulombe’s actions before and after the Monday, July 13 robbery.

Jerome Joseph Matthews said he was at Coulombe’s house the day of the robbery and he saw three large stacks of cash totalling $5,000 to $6,000. Coulombe was bragging about the robbery and pulled up online news showing surveillance shots as proof.

Coulombe’s roommate was also present during the discussion. That roommate, Nicholas Lynn Pyle, told officers he drove
Coulombe from their Grand Rapids home to a location near the credit union in his white Dodge minivan with Coulombe’s motorcycle in the back. He dropped  Coulombe off, who returned after about five minutes. According to Pyle’s testimony, Coulombe had large amounts of cash he hadn’t had when he left. 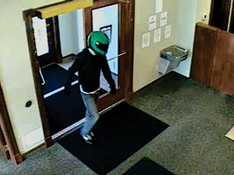 The credit union reported it was robbed of $5,879 the day of the theft. A man entered, immediately started yelling at tellers to do as he said so no one would be hurt. He gestured with his right hand to draw attention to a gun in the waistband of his pants. He took money from the two tellers and left.

Matthews said his friend had had an airsoft pistol and a BB gun at his home and had painted over the orange muzzles to make the guns look realistic. Pyle told officers that after Coulombe put his motorbike back into Pyle’s van he admitted to robbing the credit union.

According to Pyle, the pair then drove to Car Lovers Car Wash on Plainfield Avenue and power washed the bike and helmet to remove green paint Coulombe had applied to disguise their appearance. After washing the bike the two went to Village Motorsports on Plainfield, where Coulombe left the bike to have work done on it. At Village Motorsports, the manager remembered Coulombe because he had a large wad of cash. He was suspicious of Coulombe because of the cash and because he was spending more money on the motorcycle than it was worth.

The same evening of the robbery, unknown individuals came to Coulombe’s home and attempted to rob him, Pyle claimed.

Pyle stated that Coulombe tried to ward off his defenders with a skateboard, then used it to break a window and ran away, cutting himself on the glass. Pyle said he took Coulombe to a Meijer to clean up. Associates at the Meijer store confronted him in the bathroom and asked him to leave, and took note of the van license plate, which was traced back to Pyle.

Pyle advised authorities that over the past several days he and Coulombe had spent most of the money buying drugs and gambled at Soaring Eagle Casino in Mount Pleasant.

Pyle also said Coulombe attempted to rob a bank in Sydney, Michigan on July 10 but had left because there were too many people in the bank.

In searching Coulombe’s house, officers found a motorcycle helmet and clothes matching those shown in security film. The soles of his shoes match those of the shoes worn by the robber. There was green paint found in the cargo area of the van and paint found on Coulombe’s motorcycle.

Coulombe was arrested on Friday and booked into Kent County Jail. As of press time he was in Montcalm County for unrelated charges, said John King, Supervisory Agent of the FBI’s Grand Rapids Violent Crimes Fugitive Task Force. According to King, there was an outstanding warrant on Violent Crimes Fugitive Task Force in Montcalm County for larceny and theft. He will be arraigned this week. King said he couldn’t comment on the ongoing investigation, but had stated earlier, “It is very important that the public be our eyes and ears in cases like this.”