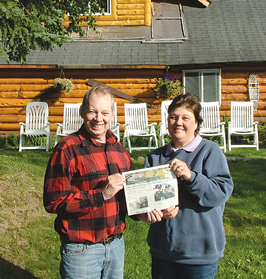 Jerry and Myrna Schuiling, of Rockford, recently returned from their vacation of a lifetime, in Alaska. Among highlights is Jerry’s “grand slam” of fishing—catching five species in one day. Schuiling caught an Arctic grayling, Arctic char, Northern pike, king salmon (he caught three that day, one at 36 pounds, which he released so it could spawn) and a chum or dog salmon.

Schuiling said people from all over the country were visiting the Anvik Lodge, where the couple stayed for much of their two-week trip. He said he met fishermen from California, Texas, Wisconsin, and as he stepped off the plane he met sports legend Larry Csonka. The couple visited historic Seward, Alaska, Fox Island, the Denali National Park and Preserve, Fairbanks and the town of North Pole, where letters to Santa are sent. They saw moose, caribou, bear, eagles and sheep and enjoyed spectacular scenery. “To get the feel of Alaska, you have to see it. Pictures will never do it justice,” Schuiling said.