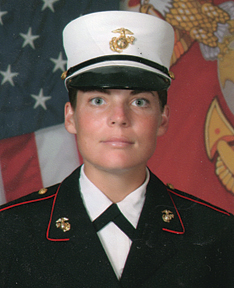 As a Marine, Private Ott went to Camp LeGuene, N.C. for additional combat training and received a Meritorious Mast Certificate for Excellence and graduated in the top five percent of her class. She is currently training for her Military Occupational Specialty which is electronics maintenance in California.

The Marine Corps is proud to have her serving in its ranks.

He is the son of Gordon and Barbara Neville of Rockford, and is a 2009 graduate of Cedar Springs High School.

The four-week course is a leadership internship for cadets that can lead to the ultimate goal of becoming an army officer. College students experience and examine the army without incurring an obligation to serve in the army or ROTC, and are eligible to receive two-year college scholarship offers and attend the advanced ROTC course at their college.

Reda is the son of Ken Reda and Cheryl J. Reda, both of Rockford. He graduated in 2004 from Rockford High School, and received an associate degree in 2008 from Grand Rapids Community College.

Bobeldyke recently completed an extensive career development program for new agents, which prepared him for the state licensing examination and provided instruction in all areas of property/casualty and life insurance. His training included the agent career school at the Farm Bureau Insurance home office in Lansing. Farm Bureau agents are licensed to sell all lines of insurance, including life, home, auto, farm, retirement, and business.

Prior to joining Farm Bureau Insurance as an agent, Bobeldyke had an extensive career in local business ownership/international marketing specialist.