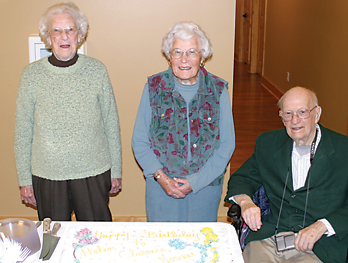 HAPPY BIRTHDAY TO YOU—All turning 94 this fall, these Rockford residents were honored at the Thursday, November 5 Rockford Historical Society meeting. Pictured are Norine Elkins, Hellen Hessler and Clarence Blakeslee. Blakeslee turned 94 the end of October while Hessler and Elkins have their birthdays coming up shortly. If you see these folks around town, be sure to wish them well.

Clarence Blakeslee has long been known as Rockford’s most famous photographer. Always carrying a camera, he has literally taken thousands of pictures of Rockford people over the years. Blakeslee was also a political photographer and has taken hundreds of celebrity photographs. Many of his pictures are on display at the Rockford Squire, along with cameras from Blakeslee’s life-long hobby of collecting cameras. Stop by the Squire office at 331 Northland Drive during regular business hours to view the photos of such famous personalities as Gerald Ford, Ted Kennedy, Liz Taylor and Pearl Bailey.