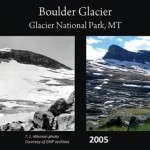 In North America’s Glacier National Park there were about 150 glaciers when the park was established in 1910. By the beginning of this year, the number was down to 37. Here are comparison pictures of the Boulder Glacier in 1932 and in 2005.

You can see in this picture of the Easton Glacier in the Cascade Mountains in the state of Washington the difference between the leading edge of the glacier in 1985 and 2008.

The poster child for glacier-melt has been Mt. Kilimanjaro in Africa. In Al Gore’s movie, “An Inconvenient Truth,” Gore expressly attributed the loss of ice on the mountain to human-induced global warming. He even forecast that “within the decade, there will be no more snows of Kilimanjaro.” That was in 2005. A British Court has since ruled Gore’s point about Kilimanjaro is not true.

Deforestation seems to be causing Mount Kilimanjaro’s shrinking glacier. Researchers think deforestation of the mountain’s foothills is the most likely culprit. Without the forests expelling humidity into the air, previously moisture-laden winds blowing across those forests now blow drier. The summit, no longer replenished with water from those winds, started shrinking. Studies show the ice is not melting; it is evaporating through a process called sublimation. You can witness this effect at home—have you ever noticed that ice cubes left in your freezer tend to shrink with time?

As a confirmation of this research, satellite measurements have shown temperatures near the summit of the 19,340-foot mountain have not been above freezing since measurements began in 1979.

But what about all the other glaciers that are melting? It appears this has been happening in many parts of the world since the end of the Little Ice Age, around 1850. The glaciers have been melting as the world has warmed from this very cold period. A very thorough research project on glaciers has determined that “glaciers show a response to changing climate, but cannot give any answer to the question about whether the forcing is natural or not.”

Glacial retreat, after all, is not something new. In the Swiss Alps, for example, glaciers were much larger during the Little Ice Age than they are now. However, they have been both smaller in volume and shorter in length than they are currently at a number of times throughout the past 320 to 2,500 years. Additionally, there is now evidence that during the last interglacial period 125,000 years ago, some Alpine glaciers were smaller than they are now or even non-existent.

The absence of Alpine glaciers 125,000 years ago was not the result of humans burning fossil fuels. This plus the fact that some glaciers are currently increasing in size means there is much more we have to learn about glaciers. We still do not know how much of the change is part of a natural cycle and how much is not.

My thinking about both sea ice, which I wrote about a few weeks ago, and land-based glaciers is this: Yes, many land-based glaciers are melting, which is part of a trend begun hundreds if not thousands of years ago. Arctic sea ice as of the beginning of May is now at its average extent since satellite monitoring began in 1979. It was a low point in the fall of 2007 but has recovered (arctic-roos.org/observations/satellite-data/sea-ice/ice-area-and-extent-in-arctic). The sea ice extent in the Antarctic was at a record high in 2008 and is still above average (arctic.atmos.uiuc.edu/cryosphere/IMAGES/seaice.anomaly.antarctic.png).

The concern, of course, is that if land-based glaciers continue to melt, sea levels will continue to rise, as they have been for thousands of years. Floating ice that melts will have no significant effect on sea levels. I’ll have another article soon on the latest information about sea levels.