A 17-year-old Cedar Springs High School student died Wednesday, June 16, when she was hit by a falling rock in Colorado. 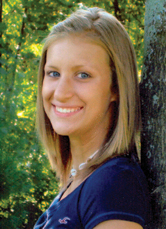 According to Kate Rusch, spokesperson for Estes Park, Colorado, Audra Brownell, the daughter of Scott and Diane Brownell, of Algoma Township was struck about 4 p.m. in an open space off the Estes Park’s Town Hall parking lot called Knolls Willow.

It was reportedly a town “green space” in a grassy area with a creek running through it. A cliff rises above the area.

Rusch said that emergency responders were on the scene immediately, and the young woman was pronounced dead from her injuries.

The Estes Park Police Department is conducting a death investigation and interviewing numerous witnesses to the incident. The area was closed to the public until the investigation is complete.

“The community is devastated by this tragic incident and our thoughts are with the family and friends of the victim,” said Estes Park Mayor Bill Pinkham. “Our police department is working around the clock to sort out the details of the incident.”

The accident occurred while Audra was on a backpacking adventure with the senior high youth group at Rockford Reformed Church. “She was a wonderful Christian young lady,” said Lead pastor Rick Tigchon, “a really sweet person.” He noted that she and her family are very involved in ministry at the church, and that Audra was especially involved in kids ministry.

“A lot of people are grieving, it’s been very traumatic,” said Tigchon. “But we feel God will help us through it.”

“She was a fabulous young lady,” remarked principal Ron Behrenwald. “She was a little reserved, but not so much that it affected her socially or academically.” He said that she was in the top 10 of her class, and very academically-oriented. She was just inducted into the National Honor Society last fall, and showed interest in going to Michigan State to study in the health/sciences field.

But Audra was more than academically oriented. “She was also very accomplished in band and was going to be section leader for the flutes next fall,” noted Behrenwald.

He said that during a grief session held for the students Thursday, June 17, many band students commented about Audra’s high expectations of herself and others.

“She was focused, she knew her part, and they really respected that and said they would try to carry that on for future band members,” he explained.

Behrenwald said the grief session came about after several coaches, teachers, and other adults said that students were having a tough time dealing with Audra’s death. They gathered school counselors and some area youth pastors so that kids could come in and talk to a counselor or pray with a pastor. About 75 to 80 students and 16 to 18 parents took advantage of the session.

“It was a really nice time to celebrate Audra’s life and for the kids to talk about the situation,” explained Behrenwald. “I’m glad we did it, I think it was helpful.”

Besides her parents, Audra leaves behind her sisters, Danae and Elena. Danae, and Audra’s friend, Luke Sneed, were also on the backpacking trip.

The funeral service will be today (Thursday, June 24) at Our Lady of Consolation Church, 4865 11 Mile, Rockford. Visitation was Tuesday and Wednesday from 4 to 8 p.m. at Rockford Reformed Church.