It is going to get colder

You may think, “Of course it is going to get colder, it is November and we are heading into December.” However, I don’t mean just here in Michigan, I mean temperatures across the globe are going to head downward

If you have read some of my past articles, you know how I believe the satellite-derived global surface temperature record is much more accurate than the record from surface-reporting stations. There are so many problems with the surface observations that many people studying this issued believe the surface data set simply can’t be trusted. The problem, of course, with satellite measurements is that they only go back to 1979.

Here is a graph of the global temperature anomalies (departures from average) from Remote Sensing Systems (RSS) in Santa Rosa, Calif. The graph begins in 1979 and covers 400 months, which ends last month, October 2010. 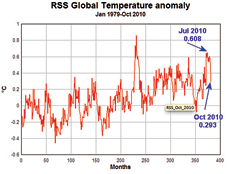 You can see the spike in temperatures around month 230, which was caused by the strong El Niño in 1998. You can also see the spike this past summer caused by the latest strong El Niño. Notice how quickly the temperatures dropped after the 1998 El Niño, and it looks as if that process has started again. I am one of the many people who believe we could see the graph drop below the zero line by the end of this winter. 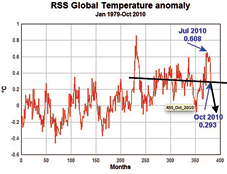 On the second graphic, I have drawn an arrow indicating where I think the graph will end up by March 2011. If this does indeed happen, you can see from the trend line I have added that we will actually have seen slight cooling since 1998 even though CO2 levels will have gone up over 10% in that time.

One of the main reasons for the surface temperatures cooling is the dramatic cooling that has taken place in the world’s oceans, especially in the Pacific as seen in the next image. You can clearly see the much-cooler-than-average surface water in the Pacific along the Equator. This is an indication of the strong La Niña that has developed. Also, note the very cool water in the North Pacific. The Pacific has actually switched into its cold mode after being in a warm mode since 1977. The Atlantic is still warmer than average, although not as warm as a few months ago. 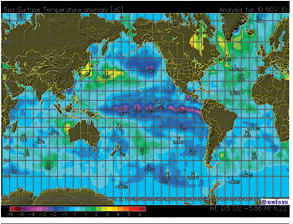 The Atlantic has been in a warm mode since 1996, but has reached its peak. If it can transition into a cold mode at the same time the Pacific is in a cold mode, I’m moving to Arizona. We’ll then see winters here like we had in the 1930s and again in the 1970s. This phasing of ocean cycles happens every 40 to 50 years and when it happens again, I suspect we’ll look back fondly on the recent warm period. I’ve always felt that global cooling is a much more dangerous scenario than warming, but that is an issue for another article.