RHS News once again has the best newscast in the state of Michigan! Each year, the Rockford High School (RHS) broadcast communications class enters the Michigan Association of Broadcasters (MAB) high school and college broadcast competition. 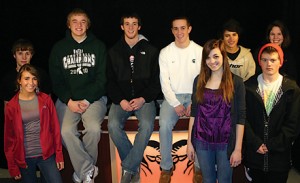 This year, the MAB awarded RHS News first place in “Newscast” hosted by Sam Vlaming, Molly Guthrie and Paige Helm. RHS also won second place in “Sports Play-by-Play” by Andrew Rademacher and Jake Schemmel, and “Public Service Announcement” by Beccie Manshaem and Melissa Eberlein. Honorable mentions went to Mitch Flinsky, Justin Wynn and Mike Rogan in the Michigan Air National Guard Current Events Program and to Dylan Bronkema and Andrew Rademacher for the news feature on American Idol Matt Giraud’s visit to RHS. The honorees will be attending the Great Lakes Broadcasting Conference and Expo in Lansing on March 9 to accept their awards.

The students wrote, videotaped and edited
all 22 entries in the advanced broadcast communications class under the direction of instructor
Kris DeYoung and technician Jason Springer. The video topics ranged from distracted driving and winter driving to Matt Giraud and the Rockford Education Foundation.

When Eberlein found out how well her video did in the contest, she replied, “I was shocked. I didn’t know people would like it [her PSA] that much.”

Schemmel said, “It was a very fun experience and I learned a lot from it, and I was glad all my hard work paid off by finishing second in such a prestigious contest.”

“I was proud to see everyone pour their heart and soul into their entries. They all deserved to win,” Springer added.

DeYoung commented, “I could not be more proud of this team. It was amazing to watch their determination and dedication. They were coming in before school, after school, at lunch, even offering to come in on a snow day. Now that’s heart.”