Don’t believe everything you hear or read

My mother always used to tell me to believe almost nothing of what you hear and only half of what you read (except in The Rockford Squire, of course, where you can always believe what you read… right?). With the advent of the Internet, it is now getting even more difficult to believe some of the things you read. Once again this year, there are e-mails making the rounds showing some incredible winter weather, and I thought I’d address whether these e-mails are true or not.

I’m sure many of you have received pictures like this first one in an e-mail stating that this iceberg occurred in Lake Michigan. It is indeed a true photo of an iceberg, but it certainly did not occur in Lake Michigan. 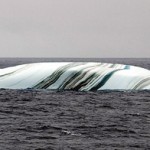 However, icebergs occasionally do look like this in the Antarctic Ocean. Blue stripes can be created when a crevice in the ice sheet fills up with melt water and freezes so quickly that no bubbles form. Salty seawater can sometimes freeze to the underside of the iceberg and if it is rich in algae, it can form a green stripe. Brown, black or yellow lines are caused by sediment picked up when the ice sheet slides downhill toward the sea. They are truly beautiful but you won’t ever see them on Lake Michigan. The pictures making the e-mail rounds were taken by a Norwegian sailor about 1,700 miles south of Cape Town, South Africa.

Another thing you won’t ever see in the Great Lakes, regardless of what your e-mail says, are frozen waves such as in this picture. 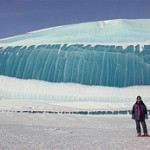 Waves like this were reported to have formed when the water froze the instant it came in contact with very cold air in northern Lake Michigan and Lake Huron. It does get cold around there, but not that cold. Pictures like this one were taken in Antarctica and the apparent waves were actually formed by melting and not freezing. Melting produced the downward pointing spikes and the smoothly polished surfaces that look like a breaking wave.

Pictures like this next one have been circulating since 2004. The first ones were claimed to be from Oswego, New York and another mailing this year claimed they were from Lead, South Dakota. Neither is correct. The original photos are of snow clearing taking place on the Trans-Labrador Highway in northeastern Canada near the small village of Cartwright. It looks as if heavy equipment had to cut through snowdrifts over 30 feet deep. 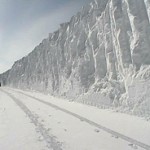 And finally, pictures such as this one of incredibly deep snow in a populated area were taken near Quebec City, February 2009, despite the many other locations suggested in recent e-mails.

I never really know whether to send a correction by hitting “reply to all” when I get e-mails like this because then the person who sent the e-mail feels like I made him or her look bad to his friends. On the other hand, if I just “reply to sender,” it is not likely that person will actually send the correction out to everyone he first sent the e-mail to. I know… I’ll write an article for the paper. By the way, you can frequently check out e-mails like this as to whether they are true or not at Snopes.com.