What a Difference Snow Cover Makes

We had a very bright and sunny weekend March 26 and 27 with 100% of possible sunshine both days, but it certainly was cold. In fact, from the 24th through the 28th, temperatures were more than 10 degrees below average even with all the sunshine each day. Temperatures at night those five days dipped well into the teens, but it would have been even colder if there had been snow on the ground. 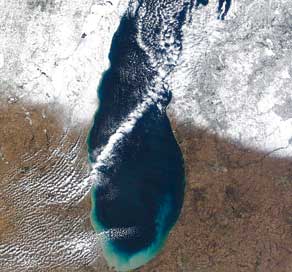 Take a look at this satellite image from Sunday afternoon, the 27th. You can see the sharp southern edge of the snow cover not far north of Rockford running from southern Oceana County to northern Montcalm County. This snow was from last week’s storm that gave Rockford and Grand Rapids mainly rain and freezing rain. You can also see a narrow band of lake effect clouds from near Ludington to near Milwaukee. This orientation from northeast to southwest is because the wind was from the northeast.

Over the snow-covered areas to our north, many locations reported low temperatures near and even below zero. The thermometer dipped to -7 near Big Rapids on the morning of the 26th. It was -6 at Cadillac on the 26th, -7 on the 27th, and -4 on the 28th. We could have been nearly that cold here if the snow cover had been a few counties farther south.

Will we see more snow? I would certainly suspect so. The average snowfall for the month of April is two inches. There hasn’t been any measurable snowfall in our area in April the past three years, so I guess we are due, especially with the cold pattern we are experiencing.

There have actually been a couple of snowstorms this past week pass just to our south, which is a little unusual for this late in the season. In St. Louis, high temperatures climbed into the low 80s on the 17th, 20th and 21st. However, they have now had 7.5 inches of snow this month as of the 28th, with more on the way. In Washington, D.C., an inch of snow fell on the cherry blossoms on the 27th. There has only been a little over an inch of snow in March in Grand Rapids. We may see more than that in April.

If you want to see real snow, take a look at the snowfall amounts for this season out west. Many ski areas have reported the most snowfall they have ever received in one season. At Mammoth Mountain in California, 606 inches is a new record amount. The least snow they have measured was in the 1976-77 season with only 94 inches. What a tremendous amount of variability! Look at the depth of snow in their parking lot.

At the Boreal Ski Resort near Lake Tahoe, a record-breaking total of 762 inches (that’s over 63 feet) has fallen this season and there will certainly be more. Squaw Valley ski resort has picked up a record 690 inches. Many of these areas are reporting they have had to dig out the snow lifts since they are buried under snow. With the exception of Arizona and New Mexico, the water equivalent of the snowpack in much of the west is 100% to over 200% above average, which is very good news indeed.