Memorial Day, a time to commemorate U.S. soldiers who died while in service of their country, began after the Civil War as a day of remembrance and reconciliation. Memorial Day has now evolved into a general day of memory, in which families and loved ones visit the graves of deceased relatives who may or may not have served.

This Memorial Day, Julie Sjogren, administrative assistant with the Algoma Planning and Building Department and president of the Algoma Historical Society, will remember a national hometown hero in her husband’s family.

John Carleton Sjogren, or “Uncle Carleton” to his family, went to family gatherings with his wife Jean, and Julie remembers her relative’s warmth toward his family.

“John and his wife were always on the go,” Julie said. “But when he did come, it was a real treat. He was a very friendly, nice man; such a gentleman. One Christmas party, he took my daughter up on his knee. He took a lapel pin off of his suit coat, and pinned it on her dress. To me, that was a big deal.”

But in addition to love for family, she will remember the courage and devotion to country he showed to the entire nation.

The following is derived from an article published in the January issue of the Algoma Township Historical Society’s quarterly newsletter, based on “A Grenade and A Prayer,” an article written by Lt. George H. Larson, written with excerpts from a piece by Judy Helsel. 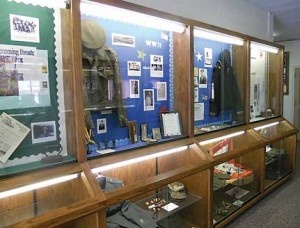 Sjogren was born and raised in Algoma to parents Carl and Anna on a farm full of corn, beans and potatoes in 1916. John had an older brother, Elmer, and a younger brother, Norman, and his sisters, Lillian, Edith and Esther. From an early age, he worked in Chicago as a bricklayer and came home on weekends.

In 1929—the year he graduated eighth grade and the year the Great Depression began—he once more showed his dedication when he spent eight years working on his family’s farm as well as another family farm nearby to see himself and his family through. In 1938 he went to work for Wolverine Shoe and Tanning Corporation in Rockford.

In 1940 Sjogren was called up to serve through the draft. After a bone specialist took a look at his X-ray, he lay a hand on Sjogren’s shoulder and said, “You’ll never get in the Army, son.”

The doctor explained that two of Sjogren’s vertebrae were deformed, and it was unwise for him to perform combat duty, and he was classified as “4F,” which meant the applicant was under the physical, mental or moral standards and was therefore not fit for military service.

As he grudgingly returned to wo rk at Wolverine, a civilian once more, Sjogren heard his brother Norman was among the first invasion wave of troops into Casablanca in North Africa. He wanted so badly to serve his country. When he was once more called upon for limited service by the draft in 1942, he knew he had to act. By now, Norman was stationed in Rome, Italy, and following suit, John asked for a classification of 1A—availability for unrestricted military service. That request was granted.

Sjogren also requested an assignment to infantry duty and the next overseas assignment. This was also granted, and he was on his way to Camp McCain in Mississippi to train, then to Hawaii for jungle training. Upon completion of training, he joined the United States Army, 40th Division, 160th Infantry Regiment, I Company, Third Platoon, First Squad, where he was named to the position of First Scout.

He saw a great deal of combat in the first half of 1945, from enemy ambushes to mortar attacks, and was wounded on more than one occasion, and saw many people in his unit die. After some time in an infirmary, after his leg was hit with shrapnel from a mortar, he rejoined his division on Negros Island in the Philippines.

May 23 was the day Sjogren (at the time, a staff sergeant) and his unit was given the order to take an enemy position on the banana-shaped Hill 3155, also called Suicide Knob. Sjogren’s squad moved in after an Allied air strike, but many Japanese soldiers survived the strike and had holed up in fortified pillbox bunkers along the ridge. 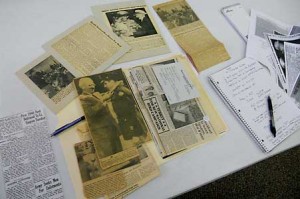 Sjogren’s company was tasked with outflanking the Japanese on the hill, and their platoon was chosen to lead the attack. As the first scout of the first squad, Sjogren began the move to the crest of the hill through darkness so thick his squad had to hold hands to move forward.

Sjogren and his squad saw it as a suicide mission, but pressed on. Sjogren had scouted out the terrain earlier that morning, but still feared a trap as they crept through the darkness. As Allied troops crept up both ends of the hill, the Japanese forces opened fire. They began lobbing grenades and anti-personnel bombs, but the squad still worked their way up the hill.

Sjogren saw his second in command (and close friend) hit by sniper fire as he was crawling over a log. Sjogren crossed 20 yards of exposed terrain and continued automatic weapon fire from the Japanese to get his friend back to the edge of the hill where the medics could administer first aid. It was then Sjogren learned that his friend had been killed by the sniper’s shot.

After losing his friend, Sjogren had only four men left in his squad, and they were pinned down by constant machine gun fire.

“I told the rest of my squad to start passing up hand grenades, which they thought I was being a fool as this would give away our position, but I started heaving them wherever I figured [they] were,” Sjogren recalled. “I could hear them holler. Bullets were flying all around us. Sometimes I threw them from my knees and other times on my belly. I was lying behind a log a few yards ahead of my unit and I could see some of the [enemy soldiers] starting to take off. I shouted, ‘Let’s go!’ and we pushed ahead.”

“I was watching a pillbox when a [soldier] who was playing dead fired three shots at me,” he said. “They went right past my ear and I hit the ground. I don’t see how he missed! My second shot knocked him down with a rifle and I crawled up and threw a grenade into the hold. Then we moved on up and blasted a machine gun position.”

“I squirmed up close enough to toss a grenade through the hole in the top of the pillbox,” Sjogren continued. “My squad kept picking them off as they tried to run from their holes. They also kept me covered as I crept up close to one pillbox after another. Sometimes I threw a grenade from 20 yards and sometimes I got within a yard and pushed grenades in. That’s about all there was to it. The rest of our platoon came up from behind and another company rushed them from the other end and it was soon over.”

After the battle was won by the Allied forces, there were many soldiers on both sides of the field that lost their lives, but his platoon agreed Sergeant Sjogren accounted for at least 43 enemy Japanese killed; at least one he had defeated in hand-to-hand combat. He and his squad, who had gone 50 hours without food or water, had succeeded in systematically destroying nine pillbox encampments on the hill.

Sjogren held each grenade for two seconds before he threw them, helping prevent the enemy from throwing them back. He was even injured by an enemy-thrown grenade, but he continued with the assault. At one point, he grabbed the hot barrel of an enemy machine gun and ripped it out of the pillbox.

After that, his platoon began calling him “Grenade John.”

Sjogren was asked on July 5 if he wanted a field commission, and was granted the rank of lieutenant. While he was still in the Philippine Islands on August 19, his 29th birthday, he was leaving church when he was informed he had won the highest award that can be bestowed in the United States military: the Congressional Medal of Honor.

He flew back to the states, where President Truman gave him the honored medal October 12, 1945.

When Sjogren returned home to Michigan, he was welcomed as a true hero.

Michigan Governor Harry S. Kelly officially proclaimed Friday, September 14, 1945 as “Sjogren Day.” During Sjogren Day, the lieutenant was awarded with a new 1946 Ford Super Deluxe Sedan, paid for by the Rockford Chamber of Commerce and most of the town’s 2,000 citizens.

The Sjogren Day celebration also included a parade through downtown Rockford to the Rockford High School football field, where they held a special ceremony in Sjogren’s honor.

There were many speakers who praised Sjogren’s selflessness and bravery, including the Rockford mayor and a number of Michigan senators and representatives, and culminated by Michigan Lt. Governor Vernon J. Brown.

“Words are too weak and inadequate to express truly the feeling your fellow citizens hold toward the record of courage and devotion to duty which you have established,” said Brown to the crowd, as recorded in the Rockford Register. “Your country and your state are pledged to express their gratitude to heroes like yourself in action… for the welfare of you men who risked your lives in the service of this nation.”

“Michigan is proud to call you its own, Lieutenant,” Brown continued. “The whole nation owes you a great debt of thanks. You and other young men like you saw this nation through the dark days of the past to the broad, sunlit uplands of victory and peace. You justified beyond our most hopeful dreams, the confidence we had in you. And—most important, perhaps—you gave America a powerful assurance for the future. We know of no task the future may impose which is too great for a nation which can produce men like yourself… On behalf of the people of Michigan, I say thank you, Lieutenant Sjogren, for the deeds of war you have done and the deeds of peace we know you will yet do. Thank you for the victory of yesterday and the faith you have given us in the security of tomorrow.”

With the audience emotional already, when Sjogren himself took the podium and spoke—far fewer words than anyone before him—he left everyone in tears.

“To me there is no honor, surely not the Medal of Honor, that should compare with the honor that should go to those boys who will not come home ever again,” Sjogren said. “Many of you people… do not know, nor will you ever know, what those boys who gave their lives went through.”

With a prayer for safe return of all the boys who were yet away from home, and with a brief statement of profound gladness to be home again himself, Lieutenant Sjogren thanked all who had come to honor him that day.