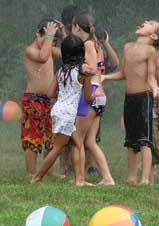 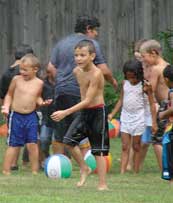 Children play at a picnic held in honor of Hillview Townhouses’ Thousand Eyes Award in honor of completing a crime-free gold certificate program.

Suzanne Hewitt remembers her very first day at Hillview Townhouses, a housing complex in Rockford. “The bus came and the school children got off and several of them lit up cigarettes and started smoking. I thought to myself, ‘You’ve got your work cut out for you.’”

That was 15 years ago and today Hillview Townhouses is a nearly crime-free zone, with residents who are quiet and respectful of their neighbors and who know that there is a zero-tolerance policy on illegal drugs. It is a safe, friendly place to live with a large green area, playground and pavilion where families play and have picnics. Many of the residents of the 135-unit complex continue to live there in their old age. Hewitt is proud that it is a place where the young and elderly can feel safe.

“I think it is something we are all called on to do—take care of the elderly and children“ she said.

On Monday, July 11, the complex and Hewitt in particular were recognized by the Rockford Police Department, including Chief Dave Jones and Program Coordinator Officer Ian Graham, for successful completion in a program designed with safety in mind.

Hewitt said she had been working to make the housing complex a crime-free zone when she was approached by Officer Mike Miller about taking some training classes along those same lines. “They were full days of training, learning about how to be a crime-free property, and we were further ahead already because we had already done a lot of that work,” Hewitt said.

Simple steps like making sure lighting is adequate and shrubs are managed—to make sure they don’t offer hiding places for those interested in lurking—were steps Hewitt had accomplished on her own. Having very few spots that might appeal to a criminal were commonsense steps employed. With the department partnering with the complex to prevent as well as deal with crime, Hewlett feels the level of safety has reached a new height.

“They were already really good about open communication with the staff and residents here and letting us know about activities we need to be aware of,” she said.

When the department initiated a whole new program for safety, Hewitt was on board one hundred percent. Officer Ian Graham became program coordinator for the Crime-Free Multi Housing Golf Certificate program.

Chief Jones was also involved from day one, designing a logo for the program, which he put on t-shirts for adults and beach balls for kids. Over a period of time, the department and the Hillview staff and residents set and reached new goals toward a safe environment. One of the more interesting steps Hewitt was able to accomplish was establishing a zero tolerance for illegal drug use. If it is confirmed by a police report a resident has been caught with illegal drugs, they are evicted within 24 hours. New residents are aware of the condition and sign a document to that effect.

Hillview, which has been operated by Hope Network since 1995, has a long waiting list and is highly sought after because of its convenient location and much sought-after school district.

“People tend to behave when they know there is a waiting list to be here,” noted Hewitt.

On Monday, July 11, Hewitt, representing Hillview Townhouses, accepted a certificate as a Crime-Free Multi Housing Gold Certificate Program complex as well as a certificate for the Thousand Eye Award for Hewitt’s “commitment to the public safety of the community demonstrated by continuing efforts to maintain a safe and secure environment in the Hillview Townhouse complex.”

Hewitt said the support of the department has been wonderful. At a community picnic held to celebrate the safety awards, Hewitt said residents and eight uniformed officers, the Rockford Fire Department spraying water for the kids to play in and plenty of smiles.

“When people know the staff is kind, the police are kind, then even in close proximity they can be kind to each other.” The certificates are signed by Chief Jones, City Manager Michael Young and Mayor Steve Jazwiec. Hewitt stated, “Apparently this is very, very cool.”