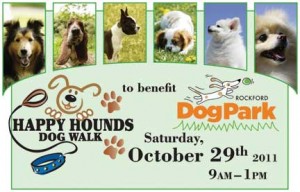 The event in a town near Seattle raises $50,000 a year to split between animal and human charities. Organizers of this year’s Happy Hounds dog walk in Rockford have lower expectations—they just want dogs.

This unique fundraiser will be a dog parade through town starting and ending at the park behind the Rockford Community Cabin. Planned for Saturday, Oct. 29, it’s a no-brainer to include a Halloween costume contest. But wait, there’s more. For just a $10 registration ($25 if you would like a t-shirt), participants will receive a “wag bag” of goodies. Vendor booths will be set up before and after for a variety of pet-related products and demonstrations.

Tom VanderSloot, who brought the idea to town after he heard about the wild success of the Harbor Hounds event in Washington state, said the walk is a positive new addition to things to do in Rockford. This first year, he is excited to get word out and get dogs signed up. The walk will be limited to 300 dogs, but families are allowed to bring more than one friendly canine to the event.

The best part of all is the proceeds will be going toward the building of a permanent dog park on the west side of the Rogue River in an abandoned ball field that is a little-known part of Richardson-Sowerby Park. Residents who proposed the park to Rockford City Council earlier this year were given a 12-month window of time to prove they could raise the estimated $12,000 needed for minimal improvements (a fence) for the park. To date, they have over $10,000 pledged.

“The support we have had has been good,” said VanderSloot.

VanderSloot praised the generosity of Hyer Luv Kennel and Grooming, Rockford Animal Hospital, and Chow Hound, who each joined the park project with a whopping $3,500—the highest sponsorship available (although a larger amount probably wouldn’t be turned down). Chase’s Corner Kennel was also a generous supporter at the $500 level, and Well Pet and Invisible Fence also supported the park with $250 in donation each. Sponsors can choose to be a Lassie sponsor for $2,000, a Rin Tin Tin sponsor at $1,000, a Toto sponsor at $500, a Kiko (local hero who ate his owner’s toe when it was infected) sponsor for $250, or sponsor a watering hole for $100 (Rockford businesses along the walking route, this is for you).

For the dog-loving public at large, the best way to support the park now is to sign up for the walk and have a great time with other like-minded individuals.

“It’s ten dollars, it’s tax deductible, it’s for a great cause and it’s going to be a blast,” said VanderSloot. “It’s a no-brainer.”

This year’s walk will benefit the dog park, and in future years VanderSloot envisions other causes, just as the Harbor Hounds walk does.

“It will be a split between an animal charity and a human charity,” he said. “Even though we call it a dog park, it’s also for people too. The dogs aren’t going to be going to the park by themselves.”

To sign up for the first Happy Hounds dog walk, visit rpmoll.com/happyhounds.