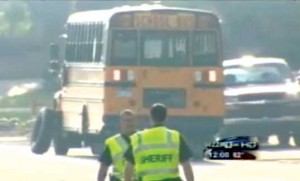 Rockford school officials and police stated that a tire did not break loose from a Rockford bus as witnesses and early media agencies originally reported during a three-vehicle crash that seriously injured a woman.

“A car struck the front tire of the bus, knocking off the lug nuts on the front tire, traveling down the side of the bus, scraping it and then hitting one of the outside tires and knocking it off,” said Dr. Michael Shibler, Rockford Public Schools’ superintendent. 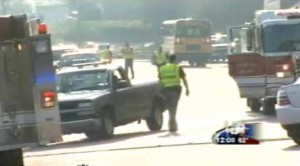 According to Shibler, the driver of the white Ford Taurus was ticketed and responsible for crossing the centerline during the early morning accident that ended up involving three vehicles on Thursday, April 19.

Early media reports and witness accounts stated that a tire came off the car, but police clarified that this was not the case. The bus was eastbound on Belding Road when the Taurus, which was westbound, drifted into the eastbound lanes and struck the front bus tire and side of the bus.

Shibler said the car spun around colliding head-on with the eastbound vehicle, a Volkswagen Passat, which was traveling behind the bus.

The driver of the Passat was taken to the hospital by AeroMed helicopter, Shibler said.

Officials confirmed that the woman’s condition had stabilized as of Monday, April 23.

The woman’s child who was restrained in a car seat was taken to Helen DeVos Children’s Hospital as a precaution to be checked out but was not injured.

The bus had not yet picked up students, so there were no children on the bus. The bus driver was not hurt in the accident, which occurred near the Bostwick Lake Inn. The driver of the Taurus had minor injuries.

The accident occurred on Belding Road near Kitson Road shortly before 8 a.m. as the bus driver was preparing to pick up the first students.

“A tire did come off the bus, but only after the car sideswiped the bus and hit the back tire,” Shibler said. “The driver of the white car was ticketed. The driver of the bus was not ticketed or at fault. The bus driver was totally in the right and there were no maintenance issues.”

The car hit the bus hard enough to shear off two lug nuts on the bus’ left front tire and then damaged the side before taking out one of two tires on the back of the bus.

While Shibler said the tire did fly off into a nearby yard, it did not strike any vehicles.

Rockford school officials notified parents in a brief e-mail of the accident and later, as rumors surrounded the accident, that the accident was not caused by a tire coming off the bus and hitting a vehicle.

After the accident, a different bus was sent out to pick up students for school.

The reason that the Taurus crossed the centerline is unknown and is being investigated.