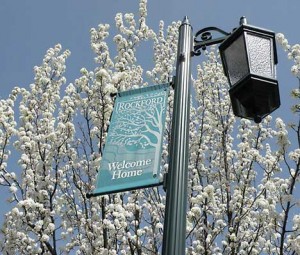 On May 21, 2012, the Rockford City Council unanimously approved its 2012-13 fiscal year budget. The budget as approved represents a balanced budget and maintains the City’s millage rate at 10.9 mills, the third lowest for a city in Kent County that does not levy an income tax.

“Our priority was to adopt a balanced budget and maintain our millage rate. We are very pleased we were able to accomplish that in this tough economic environment,” said City Manager Michael Young.

The budget also includes modest increases in water and sewer rates of two percent to cover inflationary increases over the years.

In a time where many municipal budgets are facing disaster, the Rockford City Council has made the necessary changes over the years to avert fiscal distress.

“Using fund balance to plug financial holes is only a temporary fix and we chose to look at the budget structure and make adjustments to meet our needs,” said Young.

Over the past three years, the City has reduced its full-time staffing by 25 percent. The recent public safety merger is a prime example of making tough decisions before the City faced a budget crisis. The overall consolidation, once phased in, will save the City over $200,000 a year annually. The great thing about the City’s public safety consolidation is not only going to save the City money, but City Council believe it provides a higher level of service by using existing City resources.

The fiscal year, which begins July 1, 2012, is certainly not a bare bones budget and includes some very important capital expenditures. The City has a long history of investing in its infrastructure, and this budget is no different.

The City is partnering with the Kent County Road Commission to repave Ten Mile from the bridge to Wolverine Boulevard. The City also invested in new sidewalk construction as part of the Ten Mile widening project that is nearly completed.

“If you let your infrastructure go, you never get it back,” said Young.

So the City continues to invest year in and year out.

Additional road projects include repaving Gleneagle Drive and Rockview Drive, which will commence this construction season.

The City also approved a water meter change-out program, where every water meter in the City will be replaced over a five-year period. Some meters in the City’s system are well over 30 years old and are probably not reading accurately, due to their age.

Budget challenges began with the housing market collapse in 2008, where the City saw 80 percent of its parcels decrease in value. This trend continued in 2009 and, in 2010, the State had a negative CPI, so all taxable values in the City declined. This, combined with eight years of declining State-shared revenues and transportation funding, has caused financial strains for all municipalities.

Young said he sees positive signs that the construction industry is improving in Rockford where the City has already had more building permits this year than all of last year.

“Unfortunately, I expect the State to continue to cut funds from municipalities and school districts, and we will have to continue to adjust,” said Young. “Of particular concern is the looming elimination of the personal property tax, which would cost the City of Rockford $300,000 annually. The State has suggested that they will replace the funds. However, there are no details and that is pretty typical of this legislature.”

“While I am very pleased with this budget,” continued Young, “I am most proud of our City staff who have all stepped up and taken on additional workload as a result of our staffing reductions. What has always struck me most about this community is how supportive and welcoming it is. Not a day goes by that we do not hear positive comments from residents who support the City’s efforts. I can honestly say after 17 years of being city manager for the City of Rockford I still go to work with a smile on my face every day, and that is due to our great residents and outstanding staff.”