Use it or lose it true in mental wellbeing

“What we are doing is really about learning what is going on in our brains, improving thinking and development,” said Greg Mutch, of Thought Design in downtown Rockford. The business was host to the new lunchtime format for Rockford Chamber University events. On Monday, July 22, Mutch described the dual feature of his company as health and nutrition. The office features a large room for classroom-type activities and a large kitchen for food and nutrition education.

Mutch’s modest comment was proved untrue by the interesting presentation that followed, focusing on ways to keep your brain working and fit. Denise VanEck spoke with audience participation for the following hour, which went by quickly.

VanEck called her training “alchemy” and said she “throws a lot of things together and see what we can create together.”

The session began with a group activity where participants stood in a circle and were given instructions on interacting with the others that started simple and grew increasingly complex, although not exactly hard. It was a fun demonstration and VanEck stated afterward that attendees may have thought the activity silly, but she said she guaranteed that whatever people were worried about in their personal or work lives was forgotten during the time the game was being played.

VanEck said the day’s agenda was centered around brain science, particularly neurogenesis, which is the creation of new neurons in the brain. She said every person continues to create new neurons in the brain their entire lives, right up until the day they die. She used another big word, neuroplasticity, which is the rewiring of the brain through experience. “Cells that fire together wire together,” she stated.

“Our neurons are born and if they find a purpose and a companion we keep them,” she described. She said that by participating in the game “We all created a new set of neurons.” She said if we think or talk about the experience two or three times, the connections will become established and we will get to keep those new neurons. “Those neurons will become a permanent part of your brain.”

There are cases of mature adults who have all the evidence of brain disease like Alzheimer’s, but none of the symptoms, VanEck said. Although there are conflicting studies about such circumstances, stimulation and guidance toward maintaining mental health is positive. “The brain will evolve one way or another. The goal is to guide it to the good.”

“The good news is the areas of the brain that decline with age are the ones in which we are creating new innovations,” she stated. “Dementia is a pathology that is all about daily lifestyle. A lot of us blame stuff on aging that can be controlled.”

Brain health, she said, can depend on four factors, being engaged with life, doing your best at what you are doing, at continual exposure to stimulating activities and getting out of your comfort zone.

“You train your brain to focus. The more you do it, the easier it is for your brain to focus.” VanEck said novelty is very important to the brain and doing something new every day is an excellent idea. She said there are tricks you can do to keep your brain thinking—literally—such as wearing your watch upside down for a day.

The part of the brain that stores “old ideas” is the basil ganglia. She described the function of this part of the brain as keeping automatic actions in place. “When you come to a red light you don’t have to remember your driver’s training when they taught you to put your foot down on the brake and come to a stop. You do it automatically.”

She said doing crosswords actually do not stimulate the part of your brain that needs stimulation because people get to a point where they do the puzzles without thinking because the answers are old information pulled up from the basil ganglia.

“Good mental stimulation is novelty, variety and challenge. The brain craves these,” VanEck stated. She said the idea is science, not theory and brain exercises cause the brain to create neurotrophin, a nutrient in the brain. “Research shows that neurotrophins protect your brain from damage. When you are feeling fragmented, tired, drained, you may actually have a nutrient deficiency.”

Exercises that do benefit the brain are both physical and mental. She said as the brain goes about its business of creating neurons, each neuron has synapses that reach out for connections within the brain. If synapses connect, they stay, if they fail to find a connection they may become frayed and deteriorate.

The physical makeup of a neuron is 78 percent water, 10 percent fat, eight percent protein, one percent carbohydrates, one percent salt and two percent minor constituents. Because of that, it is important to drink water all day long.

Aerobic exercises are also incredibly important for brain function because they oxygenate the brain. Yoga is also a great activity because different moves are stimulating in different ways and for different parts of he brain.

When asked about removing bad habits, VanEck had to say that there is no delete button in the brain. “For habit change, it is all about replacement,” she said. She used the example of stoplights and said if the president decreed that all red lights be replaced with purple, for a year there would be a lot of accidents. After that, the idea of stopping on purple would become a function of the basil ganglia and no longer be a new idea.

She said in breaking an undesirable habit, people need to replace it with something new “and that’s on purpose.”

She described the part of the brain where new ideas are created as the pre-frontal cortex, located behind your forehead. “Think of it as a stage with only room for four to seven players.” She said activity in that part of the brain is exhausted in about 90 minutes. “Make sure you are utilizing that as much as possible,” she said. When doing repetitive actions, the frontal cortex is not being used.

Attendee Dr. Michael Shibler asked a question about using that part of the brain and said he is a non-believer in the concept of multi-tasking. VanEck agreed, and said to think you can do many different things at one time is untrue. “When we are doing more than one thing at once it’s because we are using the basil ganglia part of the brain.”

VanEck brought up yet another large word, the amygdala and asked if anyone had ever heard of an amygdala hijack (lots of people nodded). She said that part of the brain is also often referred to as the “reptilian brain” and it controls your fight or flight response.

“That’s the part of the brain that kicks in when we are stressed. It takes over all other parts of the brain,” she said. She said all of us have our favorite fight or flight tools we use in stressful or hostile situations and usually associate that with a negative emotion.

In a stressed situation a person may want to restore control to the prefrontal cortex portion of the brain. She said there are many techniques to achieve this control and cited smell as an important “mental switch.” She said citrus is the most powerful smell for stimulating. VanEck said personally she buys the strongest citrus smelling lotion she can find to fight stress.

“Another big one is nature,” she described, and recommended keeping something nearby which has a beautiful scene of natural beauty.

A quick stress fix was a very cool technique that anyone can do anywhere in just a moment. VanEck demonstrated, making an “0” with her thumb and forefinger.

She said this simple mental trick fills your brain with positive emotions. She said people can use it before a presentation to feel upbeat and unthreatened, when getting ready for an important meeting, or on the cusp of any activity that might tend to cause stress or anxiety. She called it a “full brain turn-on.”

The next section of the meeting was another group activity which was inexplicable until it was explained. VanEck had the first person around the table begin a story with each person after that adding a sentence to the story prefaced by “Yes, and…” The story was about a person on the trail with a dog and then with children, someone had to use the restroom, more action took place and eventually ended with a meal. Each person began their contribution with the “Yes, and…”

When describing the meaning of the activity, VanEck said the brain is five times more likely to go to a negative response than a positive one, but can be trained to tend more toward a positive response. She said she was introduced to the “Yes, and…” game fifteen years ago, “And it changed my life.” She said the opposite response (the more natural one) is to meet new information with a “No, but…”

VanEck said puzzle mind games are very good for the brain, as are logic puzzles. She also said drinking a large glass of cold water can be a mental reset when the brain is tired and described another mental brain reset of a “sensory jolt.” She asked participants to imagine the flavors of foods you normally wouldn’t pair together. 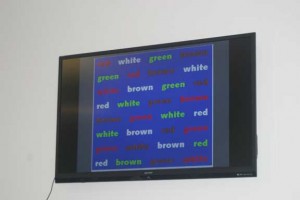 Finally she ended with an exercise in reframing, which is another technique to “wake up” the brain. As a group she had everyone read the words on a slide, all were words that were colors, but didn’t match the color the word described. First all reading just the words, the group sounded like a rehearsed team, not a single misstep among the reading.

Next the group was asked to speak together again, this time saying not the word but the color the word was made of. After about four words, the group fell apart, everyone having difficulty forcing themselves to say the color of the word instead of the word itself.

She said this mental activity cannot only stimulate the brain to pay attention, but can be a tool in reassessing a situation and turning it to something more controllable and manageable.

VanEck thanked everyone for participating in this first Chamber University of 2013 and hoped the short primer on brain health will be useful as we all try to do our best in our professional and personal lives.

“In the world we live in now, it isn’t going to be the guy with the best widget who is most successful. It will be the guy who is able to out-think the competition.”

The next Chamber University is September 23 at the Rockford Community Cabin from 11:30 to 1 p.m. Professor Rob Vermeer will explain the new rules and the ins and outs of the Health Care Reform. Bring a lunch or have one brought in by a Chamber member. After that, on November 11 learn how to be part of the political process, also at the Community Cabin from 11:30 to 1 p.m. Dr. Michael Shibler will talk about making a difference in Lansing. All Chamber University events are open to Chamber members and future Chamber members and are free of charge.