Multiple system failures occurred simultaneously to allow the City of Rockford’s water to be tainted with dangerous levels of E. coli bacteria, and City Manager Michael Young said the source of the contamination may never be identified.

Young said a chlorine pump that was only about six months old failed to work correctly and was found not functioning when city staff returned to work at the water treatment plant Tuesday, September 3. The machine served to measure and control the amounts of chlorine in the public water supply.

Additionally, an automated alarm system designed to ensure the pump was working as designed also failed, not signaling the chlorine pump had malfunctioned. The result was a lower than normal amount of chlorine in the water, which tested positive for E. coli bacteria.

“Normally we test [the water] on Saturday, we don’t test on Sunday, and test again on Monday,” Young said. “Because of the Labor Day holiday, we didn’t find out about the malfunction until Tuesday.” Young said subsequent testing of the water revealed the presence of the E. coli bacteria and the boil water advisory was issued to city residents.

The E. coli had to come from a warm blooded animal, but there has been no evidence of where an animal or animal excrement entered the water supply. Young said the water treatment plant was being “torn apart” in a due diligence effort to investigate the source with no result.

Other cities have had similar contaminations, and Young mentioned a nearby city where a faulty seal on a water tower allowed bird droppings into the water system. He said the contamination could not have occurred in the plant where the water from Rockford’s underground source is treated unless an animal was able to get in the building. 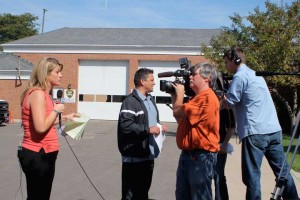 Young said the multiple failures happening at once was “an unbelievable number of circumstances” and the city would certainly look at protocols to see if improvements can be made to make sure the incident is never repeated.

“This is a newer plant, eleven years old, and a piece of equipment that was less than a year old,” he described. He said the city is talking with the supplier of the chlorine pump as well as investigating the failures.

City staff and volunteers responded rigorously to the demands of the community while the boil advisory was on, working until 9 and 10 p.m. to hand out safe bottled water, said Volunteer Police Unit members Robin Behrend and Becky Matson. The two women were at the fire station at Rockford City Hall the afternoon of Thursday, September 5.

The pair said the Rockford Family Fare Fresh Market stepped up to donate 140 cases of bottled water, which were delivered to City Hall about 4 p.m. on Wednesday. Manager Char Bouwkamp said she was very happy that the store was able to help the residents with fresh water.

In the afternoon of Thursday, September 5 members of the Rockford Department of Safety watched as a Wolverine Worldwide semi truck, loaded with pallets of water from Ice Mountain, pulled to the front of the fire station on Bridge Street. Public Safety Chief Dave Jones said Wolverine offered the use of the truck and driver after Ice Mountain volunteered the large load of water for Rockford residents. A similar shipment had been delivered the first day of the water advisory as well. 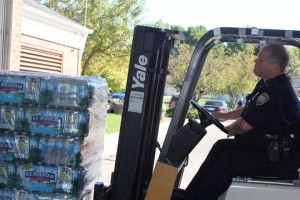 “We are grateful to have this,” Robinson said of the machine. “We unloaded the pallets by hand yesterday.” Robinson said residents were mostly grateful to receive the water. “It’s like your car. You don’t realize how much you need it until it breaks down and you don’t have it. The same with water.”

On Wednesday, Young was waiting for the results of the first test after the levels of chlorine were raised back to normal. The first clean results cam in at just before 5 p.m. Thursday, but the test needed to be repeated and have two clean results before the advisory could be lifted. At noon on Friday, he announced to news crews at City Hall that the second test came back clean and the water was safe again.

“The City of Wyoming reached out to us when they heard about this,” Young noted. “Normally the water tests take 24 hours to come back, but they are able to turn them around in about 18 hours.” He said Wyoming’s generosity and willingness to help shortened the time before residents were advised of the positive test results.

Residents were advised by the Kent County Health Department to flush toilets and drain hot water heaters and change water filters. Ice machines and other sources of water before the contamination was cleared should also be cleaned.