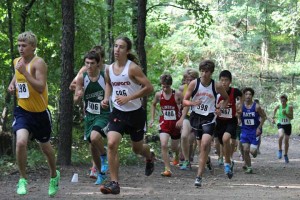 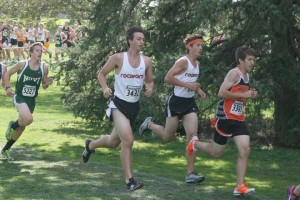 Rockford placed second (68 points) behind a strong West Ottawa team (45 points) in the varsity division of the Sparta Invitational. Grandville was third with 83 points. Kyle Lamos in eighth place (17:42.92) and Connor Johnson (17:45.69) in ninth place were the top Rockford runners, followed by Kirk Dickson (18:01.48), Kurk Goodson (18:07.06), and Nick Ludwig (18:14.52). “The team and coaching staff were very pleased with the results from Saturday’s meet,” stated Coach Martin. “It showed us that, despite us having a very young team, we have a great deal of depth and we will be able to compete using that depth as our strength.”

Rockford’s varsity runners competed against 28 teams, Friday, September 13, in the 5,000 meter Spartan Elite event of the MSU Spartan Invitational at Forest Akers East Golf Course in East Lansing, Michigan. Sophomore Isaac Harding was Rockford’s top finisher in sixteenth place with a time of 16:13. Paul Burke (16:55), Grant Gabriel (17:00), Colin Reichenbach (17:02), and Grayson Harding (17:15) rounded out the top five, giving the team 322 points for a tenth place finish. Waterford Mott (90 points) was the first place winner of this division followed by second place St. Joseph (151 points). “We were 4th here last year and ended up 3rd at the State Finals in November,” quipped Coach Martin. “Considering that we only returned Isaac—who was our fifth man last year—from that team, we were pretty pleased with how we have quickly recovered. These young runners have seen the fruits of their labor come to harvest.”