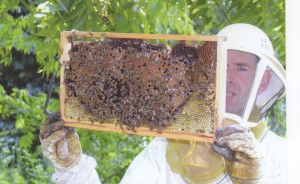 Beekeeping; one of the oldest professions known to man as depicted in ancient cave drawings, is now becoming very popular among modern man and woman alike. The increasing demand for local honey, Honey bees and the products from the beehive has opened the door for any beekeeper or hobbyist who cares to sell these products produced from the materials of the hive, such as soap, lip balm, candles etc.

In 2012 Jeff Harkema of Rockford setup his first 3 hives about 2 miles from town. By fall he split the hives to make more bee colonies and ended the season with 7 hives going into winter. The spring of 2013 yielded 5 living colonies. A colony is a family of mostly female bees with only one queen which is the mother of all the bees. There are some male bees known as drones which do help maintain colony temperature and also breed with virgin queens in the area if needed. Drones are kicked out of the hive in the fall to ensure that there is enough food for the colony. They are simply not needed in the winter months because there is not much activity within the beehive and they are nothing more than an extra mouth to feed.

In May of 2013 Jeff bought 3 more hives to start a new yard called an apiary. Jeff made more splits from all the hives (a split is when you divide the colony into 2 or more hives) and increased to 33 hives going into winter. Some of these hives came from walls, ceilings, swarms caught or removed from residential properties. “I recall spending my 4th of July weekend removing about 30-40,000 bees from the Rockford Advertising office” Jeff said. This is done by cutting the hive into pieces and placing them into wooden frames which are then installed into a wood box called a hive body. These boxes where designed by Langstroth. Langstroth had made popular this design which allows the beekeeper to remove the frames containing the honeycomb with minimal disruption to the bees. This is still the most popular type of beehive in the U.S. today.

Jeff also caught his first swarm of bees from Malafa Farms of Rockford. A swarm is a family of bees which has left the old hive location to start a new colony somewhere else. This is how bees procreate and it happens in late spring and through the summer. Avoiding swarming of your hives is the goal of most beekeepers and this becomes the challenge to “keep” bees. If all your hives swarm you may not get any honey crop that season. When a swarm leaves the old colony they take a lot of honey with them. (as much as they can carry) The bees fill the honey stomach which is a non-digestive chamber they use to transport the nectar or honey in case of a swarm. Nectar is high in water content which the bees dry down into honey. The old queen leaves with this swarm and usually lands near the old hive location somewhere on a tree branch, 10 – 30 feet off the ground. The majority of the bees in the swarm congregated around the queen to form a cluster around her. They will stay there usually 1-3 days and send out some bees called scouts to search for a suitable nesting site. After the scouts debate the various locations they decide which is best, they fly there and begin to draw new honeycomb using the honey they are carrying. Swarms are typically very docile and don’t sting unless they feel threatened. Please don’t spray the bees, find a beekeeper to take them, most beekeepers will come and pick them up from your property for free. Jeff loves free swarms and the first one he got he could not resist putting his bare hand into the cluster of bees. He never got stung that day.

In spring 2014, 22 of 33 hives had made it through the winter. Many novice and experienced beekeepers had huge losses that year and many had lost all of their hives. In May Jeff bought 10 more colonies and by September had 70 colonies ready for winter. Jeff also sold some queen bees that he raised himself and also sold some miniature colonies called “nucs”, which is short for nucleus. For northern climates it’s better to start beekeeping with ”nucs” because of our shorter season. Many new beekeepers buy “packages” which are ok for those with the equipment suitable to raise them. “Package” bees do not have any baby bees known as brood. The “nucs” have brood and all ages of bees so they expand quickly and immediately grow. “Package” bees are about 6 weeks behind in population and often never secure a honey crop or even enough food to make it through the winter. Jeff considers himself to be a bit aggressive with the way he manages his bees but this is why he feels he is more successful than most. Success in beekeeping is not easy but very rewarding. “I spend my winters making most of my own beehives so to see them all full of bees is very rewarding”.

The 4 most asked questions for Jeff are: 1. Do you get stung? Answer: Yes, a good day means no stings but a typical day in the apiary means at least 1 sting, yet some days it’s 30 or more.

Beekeeping and farming is a good relationship that needs to continue. Corn is wind pollinated so these farmers don’t need bees around. 2/3 of the food you eat requires insect pollination and honey bees are great for this. The farmer needs this service to increase yields which makes it profitable. Most bees used for pollination are moved by truck all across the country and this increases their ability to find a better balance of diet.

Anyone can become a beekeeper, it’s not that hard although it does require a bit of education. I learned most of my beekeeping from the internet via: youtube and many, many, many articles written by people from all over the world. I researched for a year before getting any bees. You have to take the information with a grain of salt. What works in the south may not work in the north. The things I do may not work for you either. You must do the work for yourself by becoming educated about bees for the area you live in.

If I could sum up what I have learned about honey bees to make others more successful, it would be this:

(every beekeeper learns this the hard way including myself)

I am always eager to answer questions for anyone interested in beekeeping. If you are interested in getting started I am offering some classes to help beginners to be successful raising bees in Michigan. These classes will be held at RUMC at 159 Maple Street, Rockford MI 49341

Saturday Feb 28 from 9 till 1 pm and I will have some more advanced classes on splitting hives and raising queens in March and April. Family and group discounts of up to 50% off. If interested, reserve your spot by contacting Jeff Harkema at (616) 866-2453 or e-mail me at jthhoney@gmail.com

I will also be selling colonies and queen bees beginning in April and throughout the season.