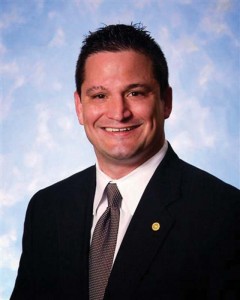 Young was named the 2015 president of the Michigan Local Government Management Association (MLGMA) during the organization’s annual Winter Institute in Novi Jan 27-30. He succeeds 2014 MLGMA President Peter Auger, manager of the City of Novi. MLGMA is the professional association for local government managers from cities, villages, counties and townships throughout Michigan.

“Having served as a MLGMA member since the early 1990s, it is truly an honor to represent the organization,” Young said. “I’ve had so many outstanding mentors, some of whom have also served as president of MLGMA, so to follow in their footsteps is humbling, yet also exciting.”

Young’s public service work started in 1990 as an intern in Spring Lake under the tutelage of the then Spring Lake Manager Eric DeLong. He was an assistant city manager in Greenville for two years before becoming Rockford’s manager in 1995, where he has remained for the last 20 years. Young, who grew up in Grand Haven, has a bachelor’s and master’s degree in public administration from Grand Valley State University, He and his wife of 25 years, Melissa, have three children, Michaela, Mckenzie and Jake.

Prior to being named MLGMA president, he spent the last year serving as the organization’s president-elect and also served on various MLGMA committees.

Young said one of his main goals this year as MLGMA president is to better inform the public about the role of municipal managers.

“I’m concerned with the high turnover and lack of new municipal managers in Michigan,” Young said. “Why aren’t more college graduates going into community management? Let’s face it, if all you read about is a community manager being fired or is in trouble, why would you want to go into that field? But I’m really idealistic about this profession. I think it’s a real noble profession.”

To address those issues, Young hopes MLGMA can become more of a resource for struggling local governments and managers.