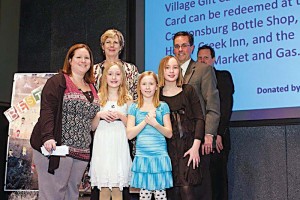 The Wolverine Worldwide Family YMCA hosted its annual YMCA Auction at Wolverine Worldwide headquarters on January 30, with a goal to raise $75,000 to support the YMCA Scholarship program. Y Staff and board members were blown away by the generosity of those in attendance and the community at large. More than $122,000 was raised and will be used to make sure that programs at the YMCA are available to all in our community, regardless of ability to pay!

“This was beyond our expectations,” said Dave Powers, YMCA Board member and Auction Chair. “So many people will be able to benefit from this generosity.”

Many silent auction items went for three times their value. During the live auction, popular items such as a meet and greet with Alan Trammel, former Detroit Tiger’s baseball player, at a Whitecaps game went for thousands of dollars. Other popular items were vacation
get-aways, Michigan football tickets, condos and cottages brought in big dollars. One
lucky winner was drawn for a $5,000 Disney World vacation trip for 4, including air fare.

The highlight of the night was the Fund-A-Need presentation where a mom and her three kids were able to articulate the importance of the YMCA summer day camp program.

“When school is out, working parents need a safe and fun place for their kids to go over the summer,” said Dean Buntley, Wolverine Worldwide Family YMCA Executive Director. “Childcare can be one of the biggest expenses a single mom has to deal with. The YMCA provides day camp all 13 weeks for kids to enjoy.”

After hearing this story, 52 people raised their paddles to support this program directly.

“People have already been asking about how they can be involved next year so we had to get the date on the calendar,” said Powers. “We have already set a date for next year’s YMCA Auction to be held on January 29, 2016.”

The Wolverine Worldwide Family YMCA Board of Directors would like to thank the presenting partner of YMCA Auction, Community West Credit Union, all the additional partners, those who donated items and those that bought them. If you or your company would like to sponsor or donate items for next year’s YMCA Auction, contact the Wolverine Worldwide Family YMCA at 616-363-3000.