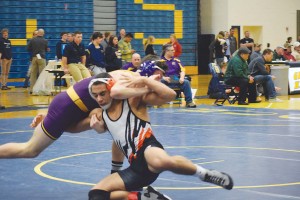 It was a night of what could have been when the Rockford wrestling team squared off with Forest Hills Central at the Rangers gym on Wednesday, February 11th. It was a Division 1 Michigan High School Athletic Association District final with the winner advancing to Rockford the following Wednesday for Regional action. The Rams were victorious in six of the 14 matches and came ever so close in three other weight classes (losing by scores of 2-0 at 103, 6-3 at 215 and 5-4 at 285) to pulling out a win in a meet that was tightly contested throughout. If Rockford had won one of those swing matches they would have had to go to criteria to determine a winner.

The Rams were led by senior standout Jared Bennett who pinned his opponent in 3:45 at 119 pounds. The other Rockford pin was from Andy Hansen who made quick work of his opponent at 125 pounds with a pin in 1:34. Nick Guerra was the recipient of a forfeit that added another six points to the Rockford cause.

Michael Tankersley also jumped on the bonus point train when he recorded an 11-3 major decision at 112 pounds that netted four team points for Rockford. Claiming decisions for Rockford were 171-pounder Caleb Childers with a 13-6 triumph at 171 and Tyler Glave who prevailed 6-1 at 189.

The loss ended an up and down season for Rockford that ended abruptly with the conclusion of the district final. The Rams had several promising wins early in the season but injuries, illness and inexperience derailed the team from what was a solid start. With the loss the Rams sent their individual wrestlers on to district action at Grand Haven on Saturday, February 14th.