Key Leaders of the Event Inducted into the MASA Winners’ Circle 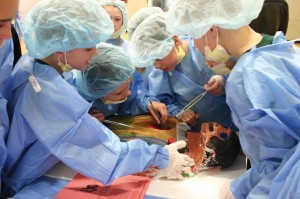 Greenville, MI February 2, 2015 – On January 22, 2015, Peter Haines, Superintendent of Greenville Public Schools, along with Baldwin Heights Elementary School teacher Mindy Hepinstall, Baldwin Heights Principal Mike Walsh and Spectrum Health United Hospital director of surgical services Eric Nelson, were inducted into the Michigan Association of School Administrators (MASA) Winners’ Circle for their part in Mini Med School. The Winners’ Circle is MASA’s way of recognizing members whose leadership has launched or adapted an effective program or practice which achieves results, and could be replicated in other districts. The program administrators were honored at an awards and recognition luncheon during MASA’s Midwinter Conference in Kalamazoo.

“You can hear a pin drop in a gymnasium of over 90 students on surgery day,” said Walsh. “The students are that into it and that committed to the entire process. What they get out of this and what they learn from this program is phenomenal.”

The Mini Med School program is a collaboration between Greenville Public Schools’ teachers and clinical staff at Spectrum Health United Hospital. The program lasts approximately four weeks and helps introduce fifth graders to health care careers and the natural sciences by studying the human body systems. Students construct three-dimensional, life-size models of a human body with the anatomical systems they have studied.

The program concludes with surgical staff from Spectrum Health United Hospital coming into the school setting and coaching students in performing mock surgeries on the replica bodies. Students are divided into groups and perform surgeries such as heart transplants, lung transplants, appendectomies and cerebral aneurysm repair. The fifth graders scrub in right alongside of the surgeons and don the same operating room attire, giving them an even greater perspective on careers in health care.

The inaugural Mini Med School in 2011 was a resounding success and model of partnership between the schools and hospital. Hepinstall received positive feedback from students, parents and her peers. “We set out to find a creative way to teach kids about the human body and its systems,” said Hepinstall. “The Mini Med School succeeded in doing this and also opened students’ eyes to careers in the medical field.”

Eric Nelson, director of surgery for Spectrum Health United Hospital has led the initiative from the hospital side, recruiting surgical staff and preparing for the event to make it as realistic for the students as possible.

“We are always excited to work with Greenville schools in the Mini Med School program. This program gives them a true opportunity to learn more about the role of surgery and medical care in taking care of the body,” Nelson said.