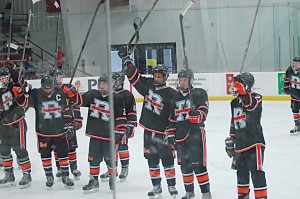 The Rockford Rams Varsity Hockey club ended the 2014/15 season with a solid playoff run. The Rams dismantled Grand Haven in the first round of the playoffs 9-4. Two days later, Rockford thumped Northview 5-1. In the Regional Finals, the Rams fell to Traverse City West 3-0.

On Monday, March 2, Rockford squared off against Grand Haven in the first round of the MHSAA Regional Playoffs at Griff’s Ice House. The Rams took control early in this game, and never let up. Rockford scored four powerplay goals in the first period: Jeff Benda (from Jacob McNamara), Brandon Perry (from Jarrett Ullrey and Benda), Brock Johnson (from Benda) and Matthew Baker (from Connor Foss and Braden King). Grand Haven netted one goal in the opening period. Rockford scored 3 more goals in the middle period: Ullrey (from Benda and McNamara), King (from Baker and Johnson) and Ullrey again (from McNamara and Perry). Grand Haven scored two goals in the second period. In the final period the Rams netted two more scores: Tanner Vesche (from McNamara and Niklas Baumgardner) and Johnson (from Foss and King). Grand Haven scored one goal late in the third period to make it a 9-4 Ram victory. Rams goalie Brendan Coolbaugh secured the win.

On Wednesday, March 4, Rockford faced Northview in the second round of the MHSAA Regional Playoffs. This game was also at Griff’s Ice House. Once again, the Rams took control early and didn’t let up. Rockford scored three goals in the opening period: Ullrey (assisted by Vesche and McNamara), King (assisted by Johnson and Benda) and McNamara (assisted by Baker). Northview scored their only goal of the game in the opening period. Rockford added two more goals in the second period as McNamara (unassisted) and King (assisted by Johnson and Benda) each scored their second goals of the game. There was no scoring in the final period. When the final buzzer sounded the scoreboard read: Rams 5, Northview 1. Netminder Matthew Hill recorded the W for the Rams.

On Saturday, March 7, the Rams traveled to Ferris State to face Traverse City West in the MHSAA Region 1 Championship game. The game was a hard-fought battle between two solid teams. The game was scoreless after the opening stanza. In the middle period, TC West grabbed a 1-0 lead. Midway thru the final period TC West netted their second goal of the game. Rockford fought hard but could not solve the TC West netminder. Late in the game, TC West scored the final goal of the game on an empty-netter. Final score: TC West 3, Rockford 0. Coolbaugh took the loss for the Rams.

Rockford will see nine seniors graduate during the offseason: forwards Johnson, Vesche and John Filipiak, defensemen Ullrey, Perry, Benda and Damon Harvey, and netminders Coolbaugh and Holly Ensley. With the returning talent, and the promising incoming prospects, the 2015/16 season looks to be an exciting one for the Rams.

Stay current on all Rockford Varsity Hockey news and information by visiting their website, RockHockey.org, or by following the team on Facebook. Go Rams!