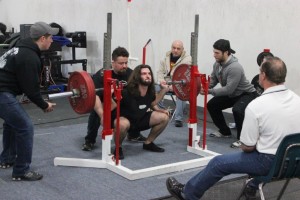 This is information on a young Rockford High School senior, Ian Bach, who just competed in his first Power Lifting meet. Ian is 18 years old and will graduate in June this year.

The Power Lifting meet, also know as the USAPL Michigan Annual “No Frills” meet, was held at Crossfit Training in Allendale, Michigan on February 28, 2015.

This was an open (men and women) meet with participants ranging from high school, college and anyone else that loves the sport of power lifting.

Squat: The lifter takes weight off of shoulder-height racks and squat down until his/her hip joint is below the top of his knees. He or she must then be able to stand back up, without the help, returning themselves to the upright position and hold the weight until the judge gives them approval to rack the weight.

Bench press: The lifter lies on his/her back on the bench with weights racked above their heads. He or she then lifts the weight off the racks and lowers the weight until the judge asks them to press it back up. After pressing he weight back up, they must lock their arms and hold the locked position until the judge tells them to rack the weight.

Dead Lift: Lifter stands above the weight on the lifting platform, takes ahold of the bar and lifts the weight until they are standing upright. He or she must stand completely upright, shoulders back and no hunching in order for the judge to count it as a good lift.

Ian competed in all three levels and at a 181-198 pound weight class. His actually body weight was 184 pounds. In the squat, bench press and dead lift Ian competed at weights of 365 pounds, 315 pounds and 490 pounds, respectively. Ian’s total for the three lifts was 1170 pounds, a very impressive total for a young competitor who has only been training for two months prior to the event.