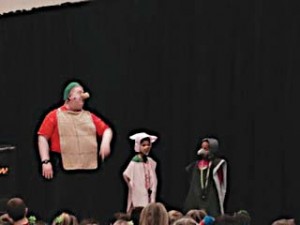 Valley View Elementary recently held a two part assembly series put on by the Brainstormers! LLC. The Brainstormers have been working for 22 years to motivate, empower and encourage kids to be creative, both “on the page and on the stage.” The first show called The Takeoff show took place in January, and its purpose was to motivate the students to produce creative writing pieces and to, in essence, become young authors. Following the show, teachers at Valley View had their students create stories, which were then submitted to the Brainstormers! The hysterical and  quirky performers from the assembly company selected 10 of the stories from the students and brought them to life on the stage on March 17th to an audience of students and staff dressed in green. The young authors, whose creative writing pieces were chosen, were brought to the Awesome Authors chair at the front of the gymnasium and were interviewed. The were able to sit in the chair of honor and see their story brought to life. Some of the stories were based on real life events and others involved aliens invading a friend’s house and SpongeBob climbing to the top of Spaghetti Mountain. Many of the kindergarten through fifth graders were also given the opportunity to use their acting and improvisational skills while playing supporting roles in each of the skits. According to many of the teachers and staff, the assembly was thought to be one of the best in years, and they all appreciated the motivational effect it had on the authors and all of the Valley View students.

A large portion of the assembly was funded by a grant from the Michigan Humanities Council and the Michigan Council for the Arts and Cultural Affairs through their Michigan Arts and Humanities Touring Program.