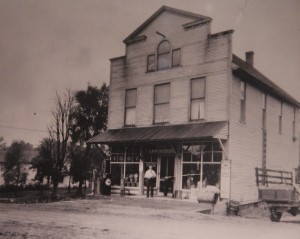 ‘The house is tired’

Best bet, the Joyce house at 7991 Cannonsburg Road was built about the 1850s. The white two-story was home to Kathleen Joyce until she was age 92 and was built by her grandfather, Edward Joyce. The home, on the banks of Bear Creek and next to the Cannonsburg Bottle Shop, will soon become not historic but history, taking with it generations of memories, secrets, sorrow and all the other mysteries of long lives in a changing time.

“The house is tired,” said Cannonsburg’s Don Kurylowicz who partnered in the purchase of the property last vacated by its final owner in 2010. Kurylowicz has made a life of remembering the past and restoring old things—buildings, traditions, recipes—but recognizes that the home is beyond saving. Because of the property location on an wooded idyllic peninsula surrounded by the hugging banks of Bear Creek, the lot itself is unbuildable with no place for a septic drain.

Kurylowicz said he is tearing the home down and will put in parking where visitors can enjoy a soon-to-be-built extension of the Cannon Trail which runs from Cannon Township Hall on Belding Road to Townsend Park. Currently the trail ends there, but soon an extension will continue the trail along Joyce Road and over Bear Creek to end at Cannonsburg Drive approximately where the home now sits.

The Joyce family was an influential one in Cannonsburg when the hamlet was a thriving one with three blacksmith shops, two sawmills, a carpenter shop, a doctor, hotels, cattle dealers, schools and churches. During Prohibition there was an alleged hopping hooch industry, and all the other Americana of a vibrant village life The Joyce family entered the picture early on after Cannons-burg was established in 1842 (See sidebar story, page ?).

Kurylowicz took the Squire through a tour of the home, which featured a special sitting room designated for entertaining traveling salesmen, a profession largely lost today. The home was built, of course, before electricity, central heat and indoor plumbing so the heat ducts run up the outside of walls, the only tiny bathroom is actually outside of the house proper and in the garage accessible through a door and wiring is likewise outside the walls through conduit.

It is hard to imagine how the last resident, Kathleen and her husband Harold, along with their rather large brood of seven children, inhabited the actually quite small home. What must it have been like with nine people sharing just one sink, one bath and one toilet.

Kurylowicz said Kathleen loved the home and the now-grown children have wonderful memories of growing up in it, but are resigned to the fact that their childhood home is unsalvageable. Kurylowicz said many people still recall the beauty of the garden Kathleen and her mother used to keep on the lovely back acreage of the property. A lover of history of all types, Kurylowicz is also sad that there is no saving the house.

“Imagine what this house has witnessed,” Kurylowicz said. Indeed, the location in the heart of Cannonsburg is a prime spot for not only the young lives of the Joyce’s, but as a testament to over a century of events.

The home was there, and very close, to the biggest mystery of Cannonsburg—the fate of the cannon for which the town was named. It is a compelling question that has mystified historians and has as many possible solutions as it has wonderers with a theory of what really happened.

The early story of the cannon is not disputed. Mr. L. G. Cannon of New York enlisted one of the area’s early settlers, E. B. Bostwick, to plot the village. In appreciation Cannon gifted the town an actual cannon, which villagers used on holidays and celebrations. The tradition lasted for years, until town officials feared an accident. On July 3, 1885, prior to the Fourth of July celebration the next day, they buried the cannon in secret. Some young men from town apparently figured out the hiding place and dug the cannon up for the next day, shooting it off in the morning and again in early afternoon.

Possibly due to overheating, the Cannon exploded and the ramrod was blasted through the leg of a William Thompsett, who was rushed to a doctor to have his leg amputated due to the severity of the damage. His injuries were so severe, however, he did hours later. Town officials again decided to get rid of the cannon and that is the mystery.

Many believe the cannon is still there in the village somewhere. Does the Joyce house have a basement? Has anyone looked there? Kurylowicz said some old timers had told him they saw the cannon being carted out of town for disposal or hiding, so maybe it is long gone. Kurylowicz’s own suspicion is that the cannon was melted down. After all, there were three blacksmith’s shops. How better to ensure that dark history is never repeated?

Another pivotal day in the town of Cannonsburg that the Joyce house not only witnessed, but survived, was the Devil Fire of April 19, 1889, which destroyed every business on one side of Cannonsburg, a total of seven buildings, including the Thomas Hotel where it started. The fire jumped the street and the Gristmill nearly burned but was saved by being covered in blankets soaked in water.

According to the Cannonsburg book published by the Cannon Township Historical Society (from where much of this information comes) the hotel, the general store, a drugstore, a barn, the Post Office and many private homes burned that day from the fire which began in the early hours, but no one was killed.

Kurylowicz said outbuildings and former outbuildings on the property are still in evidence and are of historic interest. From the property visitors can see the foundation of a former family blacksmith shop. Also unsalvageable is a former ice house behind the home. This was used heavily by the village prior to electricity.

The Joyce family also owned land on Silver Lake and every winter would cut and haul ice from the lake to the structure and keep it throughout the year for their own use and village use in cooling ice boxes. Back then all the work was done by hand and horse. Kurylowicz is preserving several artifacts he found in the ice house and in the Joyce home.

“It stood the test of time, but its time has come,” Kurylowicz said of the home. He said he imagines all the home has witnessed, but a near neighbor, a huge, hundreds of year-old oak, has seen all the same and even more. The giant tree is behind the house, visible from both Cannonsburg Road and Joyce and is a silent sentinel that marks the beginning of the peninsula bordered on three sides by Bear Creek.

“I’m calling this the witness tree,” Kurylowicz said. After the removal of the home a professional will trim the tree and bolster the ancient branches. Still vigorous, the tree predates both the Joyce home and the village itself and must have been young when the Indians who made the trail through the area lived.

It was this Indian trail that brought the first white settlers to the area from Grand Rapids. They were lured to stay by the rich farmland, the green-blue fish-filled waters of Silver and Bostwick Lake, and the riches to be made in timbering the dense forests. It was the beginning of the youth of the village, and the tree was there then and will stay, to be enjoyed by visitors to the park Kurylowicz plans to open up to the public.

“Townsend Park is beautiful, but this place is really special, too,” he described of the quiet acre and a half surrounded by flowing creek and sheltered by large tree canopy overhead. With parking at this new terminus of the Cannon Trail, Kurylowicz hopes children will again play in the creek, run across the grass and continue a generations-old appreciation of a very special place.