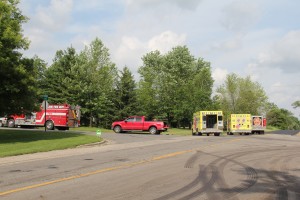 Someone missed the stop sign on the corner of Shaner Avenue and Stout Thursday, June 18 just after 5 p.m. According to Courtland Fire Chief Micky Davis, the driver of a pickup truck was ejected through the window, which he said is unusual, and was being loaded in an ambulance when he arrived on the scene. The other driver was talking to first responders as she was loaded into one of two Rockford Ambulances still on the scene a half hour after the crash. Seven emergency vehicles responded, including Kent County Sheriff deputies, Rockford Ambulance and Courtland Township Fire Department.