The possibility of up to 20 years in prison, over $130,000 in restitution and expulsion from Rockford Public Schools faces a 16-year-old Belmont student responsible for various threats against individuals and the student population at Rockford Public Schools. The student caused authorities to spend more than 2,500 hours and $130,000 in resources leading to his capture. He was behind a series of 20 threats of violence and murder aimed at Rockford Public Schools, students and officials beginning in October 2014. The announcement was made Thursday, June 18 at the Kent County Sheriff Department with members from the Federal Bureau of Investigation, Kent County Sheriff Department and Rockford Department of Public Safety present.

The student used social media and telephones sourced through free online services to call in and tweet threats, including specifically targeting nine individual students and threatening to assassinate Dr. Shibler. Threats included blowing up the high school, driving a vehicle into the Rockford Freshman Center, shootings, putting gas in the air ducts and threats to specific students and Dr. Shibler came through telephone calls and tweets to the school social media site. Early on Shibler said law enforcement deemed the threats were not viable, but are nonetheless criminal and a very serious school matter.

The teen was identified as a suspect in May, and reportedly was pulled from school for questioning May 18 and then suspended. Dr. Shibler said he will ask the Rockford Board of Education to order the student to be expelled. He would have entered school next year as a junior.

The student was arrested Wednesday, June 17 and charged as a juvenile with felony False Report and Threat of Terrorism, a 20-year crime. It was also announced that the student was in collaboration with a 15-year old from Wilmington, Massachuesetts, and their activity began as an online game. The Massachusetts teen has also been arrested. Both teens have been released.

Dr. Shibler said the teen had no previous disciplinary incidents and Undersheriff Michelle Young said there were no previous criminal incidents. 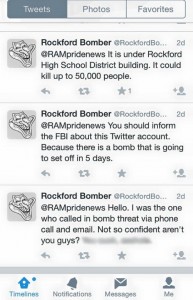 Detective William Marks said the investigation included open source and search warrants. It has been reported the search warrants included multiple Facebook accounts. According to an article by MLive, the teen used accounts identifying himself as “The Nazi of Rockford” and the “Rockford Bomber.” Marks said the investigation is ongoing and declined to speak about some specific investigative techniques as in current future use. Phone data and Internet protocol were used to identify the culprit.

Dr. Shibler said Rockford Department of Public Safety also put in plenty of time cracking the case, specifically Sergeant Aaron Sawyer, who put a lot of time into the case tracking down the online identities.

The threats caused Rockford Public Schools to be in lockdown several times, caused the entire student body, 1,900 students, to be evacuated into the gymnasium.

From the beginning of the investigation, Dr. Shibler has said he would work closely with law enforcement, including the Kent County Sheriff Department, the Rockford Department of Public Safety, the Michigan State Police and the Federal Bureau of Investigation. Head of security at Rockford Public Schools is a retired police officer who also worked closely with law enforcement. According to Shibler, the cost to Rockford Public Schools was $31,000, and the Kent County Sheriff Department spent $100,000. Both are seeking restitution as part of any plea agreement. It is reported a plea agreement is being worked out.

“This is a great outcome to a very challenging situation,” said Dr. Shibler at the press conference. He also said all along he told the parents of the school district, students and the media that he was committed to pursuing this until the perpetrators were caught and brought to justice. “I had many people tell me this was too complicated and we wouldn’t be able to get to the bottom of it. We followed through on this and persevered and were successful.”