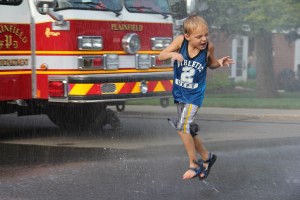 Rockford Public Safety Officer Ian Graham is excited to announce a first for Rockford’s annual National Night Out Tuesday, August 4 from 6 to 8 p.m. This year the regular line up also includes five local restaurants who will offer something (yet to be decided) but will sure to be a hit.

Uccello’s, Corner Bar, Herman’s Boy, Ramona’s Table and Rogue River Tavern will all participate with something on site at the City Hall/Rockford Chamber of Commerce parking lot at 7 South Monroe Street. For the first time ever, Bridge Street will be closed from Main to Monroe to allow crowds a little more space. If this expansion goes well with restaurants participating, Graham may continue to grow the event by bringing in businesses.

National Night Out is a country-wide celebration of safe communities and was begun as a campaign to take back neighborhood streets from crime in communities where residents feared being out and about past sundown. Chief Dave Jones of the Rockford Department of Public Safety talked about National Night Out at last month’s City Council meeting.

“We haven’t had to take back our streets from crime. This is a time to get together in our downtown with citizens and law enforcement.” Rockford’s National Night Out will include our various law enforcement organizations, firefighters from Rockford and local townships, include neighborhood watch booths with crime prevention tips and a hotdog dinner cooked by members of the local firefighters association.

Held at the Steven R. Servaas Municipal Complex (this is the first time we’ve had to use this new name for our city center) and Bridge Street, there will plenty for adults and kids to do. Fire equipment from the City of Rockford and the fire departments of Cannon, Courtland Plainfield and Oakfield township will be on site. A fire truck sprays water for people to run through, always a huge hit. 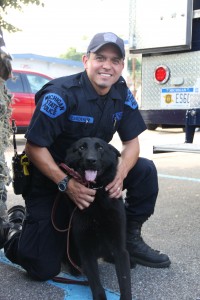 Oakfield Township’s smoke-filled simulator is a trailer tricked out to show what it can be like in a smoke-filled structure, using non-toxic, artificial smoke. It is an experience for all ages to better understand what it is like trying to escape a fire.

Participating will be the Rockford Safety Department, members of the Michigan State Police, including our K-9 officer and his dog stationed here at the Rockford post and the bomb squad. There will be deputies from the Kent County Sheriff, including the Marine Patrol and the tracking team. Various law enforcement departments will have static displays of their equipment where people can get up close and personal views of the gear.

Graham said this year’s expansion is to accommodate the many residents who come out the first Tuesday in August for Rockford’s National Night Out. Stop by for a snack or a dinner, to visit neighbors, take advantage of crime prevention material and enjoy beautiful downtown Rockford.