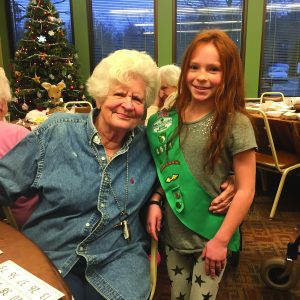 Troop Leaders Stephanie Smith and Sheila Peterson-LaBelle brought the Scouts to the Towers to participate in a Holiday Bingo held by two of the residents, Doreen McDonald and Sandra (Paul) Smid. Bingo was called by Marlene Gretzinger.

The Scouts served cookies, snacks and punch to the residents. They also played bingo with the residents who enjoyed their assistance. Prizes were donated and everyone took home a gift. Much fun was had by all who attended. The Scouts participate in events such as this as part of their community service.