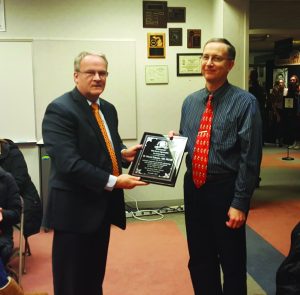 The Rockford Board of Education recognized several individuals recently including a local doctor who has contributed to the Rockford community.

“He has contributed a great deal to the school system and our students,” said Linda Rothenthaler, former school district nurse. She stated Dr. Vincent Dubravec had helped her in numerous ways including getting free EpiPens for the school system.

“He also has helped me with the student plans,” Rothenthaler said. “He is such an asset to our community.”

Linda Rothenthaler, the Rockford Public Schools district nurse who retired at the end of the 2015-2016 school year, told the Rockford Board of Education that Dubravec’s work also saved the school district money as he advocated for products. “He also has brought about six thousand dollars in savings yearly,” she said.

“I will accept this honor on behalf of two people,” Dubravec said. He said the first was on behalf of his father, Igor Dubravec, who escaped Communism to come to the United States and make a life for himself and later his family. “He was the example for me to be involved in the community.”

Dubravec said the second would be Linda Rothenthaler as she is involved in the school system and cares about the students she works with.

“Thank you for your service to the community,” said Miles Postema, Board President.

Dubravec told The Squire that his father, Igor Dubravec, was a huge influence on his career and his service to the community.

He said Rothenthaler also deserves to be recognized for the role in the achievement.

After his military obligation was completed, he served a few years in other locations before settling in the West Michigan area and starting his private practice.

Dubravec serves as an assistant clinical professor at Michigan State University, volunteers as medical advisor for Rockford Food Allergy Network, has been the coordinator for two free asthma screenings, and is active with the Rockford Public School system. Dubravec lives in the area with his wife and they have four children.

Another group that was recognized by the Rockford Board of Education was coach Tom Parks and the Rockford Rams girls swimming team, who were the 2016 state champions. The team earned the MHSAA Division One girls swim championship title in November.

“Rockford is truly a place where if you want to do excellence they are behind it,” Parks said. The members of the swim team were introduced individually and given certificates at a recent Board of Education meeting.

The Rockford Rams had three straight top-five finishes in the state finals in recent years with their fourth place finish in 2013, third in 2014, and fourth in 2015, but a school on the west side of Michigan has only won the Division One title twice before Rockford’s first place finish.

Parks said in the history of Division One swimming, which is the most competitive, the Ann Arbor area schools have won the state championship every year for the past 40 years “and we’re honored to be one of the few limited exceptions.”

Parks said he was proud of the group of girls that achieved being state champions. Parks said there are three teams in the Ann Arbor area that are consistently in the top 10 in the country.

“We’re the third exception,” Parks said. “This is really something. It is just phenomenal. It is a testament to Rockford Public Schools.”

Parks said this was a huge achievement. “They were all able to pull something off that was historic,” Parks said. Rockford has been consistently in the top 10 in the past.

Other programs that were highlighted were the Recess Clubs, which include a Spanish Club, Legos Club, and Paper Play Club. The presentation also included discussion on the Kids Helping Kid Club and Junior Achievement.