Recognizing the Rockford Board of Education and the great accomplishments of the district under the Board’s guidance was one of the highlights of a recent meeting.

Lakes Elementary Principal Sharon Wells acknowledged that January was Board of Education appreciation month and presented the Board members with cards made by the school’s second graders that thanked the members for their service. Wells said the students at Lakes Elementary collect food for Kids Food Basket in February and a $100 donation in recognition of the Board of Education is being made to the project.

“We are recognizing throughout the month of January our Board of Education trustees,” said Dr. Michael Schibler, Rockford Superintendent. “Our trustees do a lot of work. They put in hundreds of hours of hours during the school year.”

Schibler said their volunteerism includes committee and board meetings, adopting buildings which involves visiting and participating in programs at the schools, and attending programs ranging from drama and music to athletic events.

“They turn it down and feel it is their way of giving back…They are selfless people who put in a lot of time,” Schibler said.

Board President Miles Postema thanked everyone for the recognition. “This really is a labor of love for all of us,” he said.

“There are a million points of pride in the Rockford District. We are very proud to serve. We are proud to part of those,” Postema said.

Wells also was at the Rockford Board of Education meeting to highlight recent achievements with the rollout of the technology initiative in the district. Wells said that as part of the technology rollout, there are digital citizenship lessons.

Ethan Helmholdt, Lakes fourth grade student in Bre Zajac’s classroom, discussed how he was enjoying Schoology and how it helped keep him updated. He also briefly presented on Storia, an eBook site, and how different tools were helping their classrooms by using the laptops.

Kiai and Camille Blasky, first graders at Lakes, presented on how their iPads were being used for the younger students. The twins discussed Storia and SeeSaw as two of the primary programs they were using.

Camille is in the classroom of Abby Wallis and Magan Zawacki while Kiai is in Tahlia Hoogerland’s first grade classroom..

Technology is a big part of today’s society and therefore discussed at the Board of Education level on a regular basis. Eric Nephew and Mark Schlaudt presented how technology could take the students in Rockford to new places.

The technology consultants of 2 nerds and a computer compared how it would cost over $20,000 to take classes to Shedd Aquarium while for less than $250 they took 500 students.

Nephew and Schlaudt explained how interactive virtual field trip experiences could take students to new places for a fraction of the cost. The men stated even more could be done with a mobile hotspot, better camera equipment, and Bluetooth headphones.

They stated they could develop field trips specializing for every grade level from kindergarten through fifth grade and eventually could even expand beyond that. The men explained how the possibilities were endless from short trips that could be done in a day such as Binder Park Zoo or the Detroit Salt Mines to longer trips like Pictured Rocks and Sault Ste Marie.

“The possibilities are virtually endless,” they said.

Schibler said the duo had raised some obstacles that could be discussed at a committee level. “Any of those obstacles you mention can be transcended,” he said. Schibler also said it was a good time to act with technology as part of the bond issue.

“This lets the teachers customize trips to their classroom,” Eric said.

In other matters, The Board of Education:

Brendan Cranmer, son of Squire staff writer Cindy Cranmer, is a sixth grader in the fine arts magnet at ERMS. Cranmer is a Boy Scout who enjoys camping, art, fishing, reading, and spending time with his mother, twin brother, Zachary, and sister, Allison. He hopes to be an Eagle Scout someday and that achieving that goal will help towards his ultimate goal of being a veterinarian. Cranmer has pets that he helps care for when visiting his father, Chad Cranmer’s, Belding residence.

Jenae Danowski, sixth grade daughter of John and Joyce Danowski, feels lucky to have been adopted by her family that includes two sisters, Jessica and Tiffany, and two brothers, Trent and Tim. Danowski would like to attend Harvard.

Isabella Roy, daughter of Christa and Todd Roy, is a seventh grader who enjoys horseback riding and writing. Andrew Wirth, seventh grade son of Norman and Renee Wirth, has a goal to study microbes and is proud of his sports and academic accomplishments. Rachel Lewis, eighth grade daughter of Lynn and Scott Lewis, is proud of being accepted into the National Junior Honor Society and wants a career helping others. Ethan Demott, eighth grade son of Jared and Michelle Demott, hopes to be a computer software engineer. 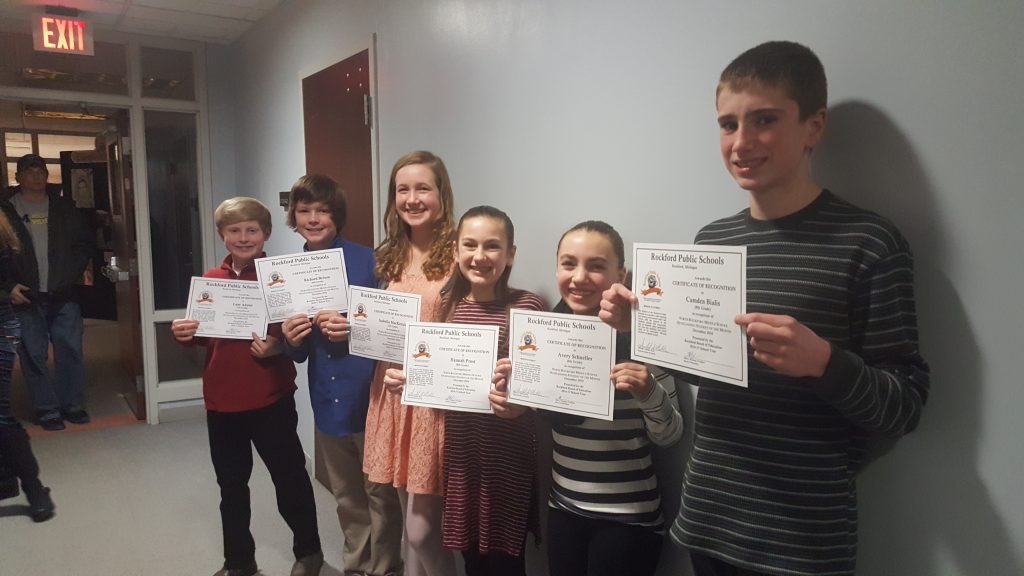