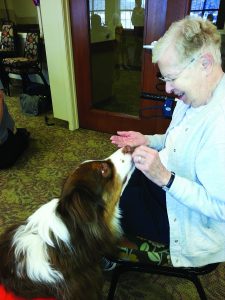 Walking down the 4th grade hall at Valley View Elementary on Friday mornings, you’ll see a big, fluffy dog trotting down the halls with the students. And you’ll hear students calling out, “Storm, Storm!” and “Can I pet Storm?” Storm, a therapy dog with the Kids Hope USA program is quite popular at the school. He can hardly make it to his classroom some days with all the pets, snuggles, and paw shakes along the way. Storm’s owner is one of 29 Kids Hope mentors from Rockford Reformed Church, each meeting with one student for one hour once a week. One very special 4th grade student, Leylah, not only gets a mentor once a week, but also a fluffy therapy dog who is eager to listen to her read, play games, and review math skills.

Storm is more than just a math and reading motivator. His second weekly job is visiting Boulder Creek Assisted Living once a week for dog therapy. Residents look forward to his weekly visits with smiles, giggles, and treats. He goes around the circle, giving everyone a chance to rub his freckled muzzle, scratch behind his soft ears, and stroke his long fluffy fur. He’ll catch Cheerios in the air, shake paws, roll over, and give lots of snuggles, much to the delight of everyone in the room. He even does personal room visits, hopping up on the bed of someone who’s sick, just to snuggle and bring fluffy cheer. He is a loving, bright spot on even the dreariest of days.

Storm, a 90-pound, super fluffy Australian Shepherd, wasn’t as hyper as the other puppies in his litter and was too big to show. His breeder said that she’d never seen such a gentle giant in 20 years of breeding Aussies. With a little dedication and training, he’s made the perfect therapy dog, bringing joy to every life he touches.

Therapy dogs are becoming increasingly common, used in a variety of jobs like reading at the library, working with counsellors and kids, visiting hospitals, accompanying anxious patients to the dentist, even sitting with children through awkward funeral services. Therapy dogs have a calming influence on children with autism, adults with disabilities, and veterans suffering from PTSD. Unlike service dogs who can’t be pet while working, therapy dogs are meant to be pet and snuggled. They thrive on hugs and attention and bring joy to everyone around. That’s why Storm’s vest has “PET ME” in large lettering on both sides.

Storm is a busy therapy dog, sometimes with three jobs each week. But when he’s not doing his jobs, he’s a running partner for his mom. He can be seen in Rockford on the White Pine Trail, Cannon Trail, or in the Bella Vista neighborhood most every day of the week. At 90 pounds, he’s not the fastest runner. But when you’re coming toward him, you can see his thick fur flying and a big, doggy grin on his face. He’s just doing his job, making everyone smile!