Chief Dave Jones said the future timeline of the ressurection of the Corner Bar is difficult to predict. He spoke at a press conference Tuesday, August 15 at the corner of the intersection where the fire of the iconic building was still smoldering.

“It’s still not out,” Jones said fifty hours after the likely start of the fire. He said video from the area show that the fire likely started around 3:30 a.m. in the area of the dumpster on the west side of the building. Michigan State Police fire inspectors are investigating to discover the cause of the fire.

Around 8 a.m. the morning of the fire Corner Bar owner Jeff Wolfe and his wife Sara were at the scene. Jones said he broke the news that the fire damage was likely going to be extensive.

“They asked if there was any way we could save the sign,” Jones said. With firefighters braving the blaze at its height, Jones called Valley City Sign company and asked if they could respond to an emergency and remove the sign for preservation.

“It meant a lot to them to save that sign,” Jones noted. 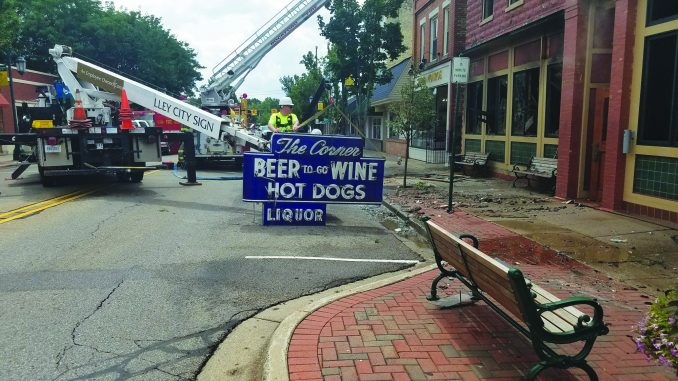 The rebuilding timeline for the structure depends on public safety, structural soundness, and the financial component, Jones said. He said the area will be blocked off for the foreseeable future. Dumpsters have been circled around the structure in case the façade collapses.

“As a representative of the city, I am determined to save the façade, the Corner Bar is such a cornerstone of the city.