Thad Beard presided over a relatively short and sweet Rockford City Council on the sixteenth anniversary of the 911 tragedy in America’s history. The Monday, September 11 meeting marked the end of the interim management of Public Safety Chief Dave Jones and City Clerk Chris Bedford, who led the city’s operations following the untimely death of late City Manager Michael Young eighteen months ago. Thad began his career in Rockford September 1 after being chosen from a nationwide field of candidates.

The meeting began with a short city manager’s report followed by public comments. The first resident to speak said she had a very slight criticism of a bill she had received for sidewalk repairs in front of her house. She complained mildly that the invoice had no date, no salutation and included the city policy that if the bill is not paid a lien may be placed on her property.

“It felt like a bit of a threat,” she stated. “Given that we citizens recently voted to increase our taxes, it seemed a bit harsh.” She was assured that the city was aware that their invoicing needed improvement. The resident also included praise for the city and stressed that her complaint was minor.

Joan Pratt spoke asking if the city could do more to remind residents when Mitchell’s Run takes place so they can not park in the street and cause runners to go around vehicles. She said she loves the event and thanked the city for allowing it year after year.

Rockford Chamber of Commerce Director Linda Southwick welcomed Thad to the job and said she looked forward to working with him. She gave an update on the upcoming Harvest Fest (September 23 and 24) and the Make It Take It Scarecrow event. She said organizer Denise Bradley is in the twentieth year of the event and had to raise the price this year to $10 per scarecrow. The event goes on for three weekends starting with Saturday and Sunday September 23 and 24 and Saturday, September 30 and Sunday October 1, Saturday and Sunday October 7 and 8. All events run from 10 a.m. Saturdays and Sundays noon to 4 p.m.

Al Pratt, Rockford Area Historical Museum, thanked council for proclaiming September as Museum Month. He said fundraising plans were changed at the last minute to not compete with the Marching Band fundraiser for the Thanksgiving Day Macy’s Parade this year. He said the Museum has asked members of the Rockford Chamber of Commerce to each donate instead, and if every member donates $50 that will cover 40 percent of the museum’s annual budget. He also invited members of the public or business community to make a similar donation.

“We all benefit from the museum,” he said. “Sixty three percent of tourists look for cultural opportunities and we meet that in spades.” He said a recent coup for the museum was acquiring a photo of the 1945 Rockford High School band with members identified. “We received that from the son of the majorette along with her baton.” 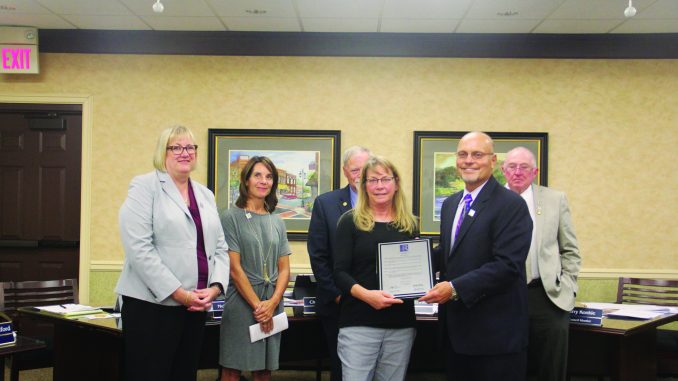 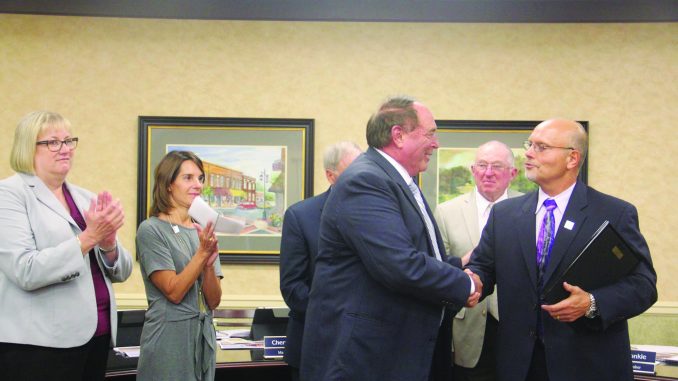 “Our fundraising efforts are very, very important,” Pratt said. There is also a raffle going on now for three grand prizes of Meijer gift certificates of $200 each.

Mayor Steve Jazwiec commented on behalf of Praise in the Park organizer Rich Moll, who is out of town. He said the free Sunday church concerts at the dam are in their sixth year with 6,000 attendees. “We’ve been saying it doesn’t rain on Sunday but this year it did,” said Jazwiec. “Eighty eight of eighty nine Praise in the Park events were able to be held.”

There were no mayoral proclamations or appointments. The consent agenda was unanimously approved. New business included three agenda items, approval of sewer repairs, approval of three street engineering, design, surveying and engineering. Mayor Pro Tem called the proposal, “thorough and well thought out and part of what we need to do for our infrastructure.”

The meeting wrapped up with a recognition of the work of Chief Dave Jones and Clerk Chris Bedford over the past year and a half covering the city manager job. Mayor Jazwiec called the past months a difficult time for the city of Rockford and staff. “Everyone to a person stepped up to the task,” he said of the city staff. Bedford and Jones each were presented with a plaque thanking them for the efforts. Department of Public Service Director Jamie Davis and Chief Jones had to abruptly leave the meeting to respond to a structure fire, but were back quickly as it was a false alarm of someone grilling. The evening ended with cake in the fire barn in honor of the end of Bedford and Jones’ interim city leadership.