The American flag that was presented to the family of Trooper Timothy O’Neill at his funeral was displayed in a beautiful, handcrafted shadowbox displaying his name, title and the date of his death.

The brief but heartbreaking engraving and the creation of the shadowbox was done by members of the Grand Rapids Community College’s current recruit class and presented at the Rockford State Police Post Monday, September 25. That day was the visitation for the trooper who died the previous Wednesday after a motorcycle crash while on duty. 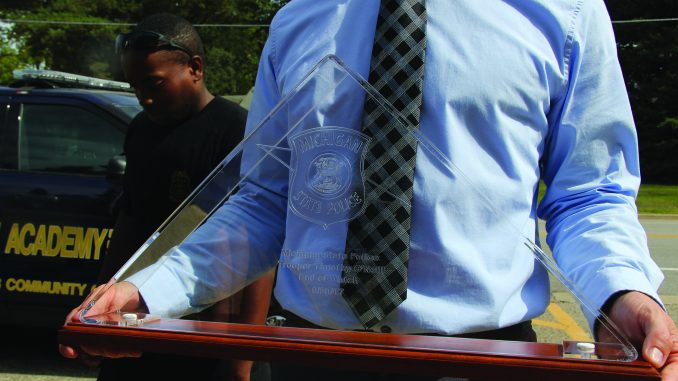 Sgt. Jason Nemecek accepted the shadowbox in front of the post and asked the recruits about their future. They all look forward to a career in law enforcement.

“One of the exciting parts of police work is we are all one big family,” said Nemecek. He called the State Police “a top notch department” who all work together and keep lines of communication open. He said he was working the day O’Neill died. “It’s the radio call you don’t want to hear is officer down,” he described.

He invited the group to tour the Rockford post, which he called an older building and hinted that a new post might be built in the near future within 20 miles of the current one. “We really outgrow this.” He said the newer structure of the State Police is to have officers out on the road as much as possible and new technology allows them to work from “mobile offices.”

He talked about the atmosphere at the post since the loss of O’Neill. “It’s been awfully tough around here. You have to try to push through and keep things going.”

Of the job of law enforcement, he told the recruits that they would see a lot on the job. “You are going to see stuff you never imagined. That’s the most of what you do on the job is interact with people. You will be a superhero, a counselor, a problem solver. It never gets easy.”