The Rockford High School Marching Band dazzled the crowd and judges with their Asian inspired show “TAO” and swept all awards in Flight I competition at the 32nd Annual Jenison Marching Band Invitational on October 21, 2017. Twenty-five bands competed in the Michigan Competing Bands Association’s (MCBA) portion of the invitational with Rockford taking first in Flight I as well as caption awards for Best Musical Perform, Best Marching Performance, and Best General Effect.

“Our performance was a huge step forward for the band. Putting all four movements on the field for a competitive audience was an amazing accomplishment for the entire ensemble. The sounds, the visuals, and the energy of the band gave me chills!” exclaimed Drum Major Dwight Hua following the band’s performance.  “It was outstanding. We filled the Jenison stadium to the top. After performing such a breathtaking show, the band is striving to reach an even higher level of excellence. Tonight’s show was incredible, but we still have lots of hard work to improve and be even better.”

The band’s score of 92.275 was the highest posted at Jenison and earned Rockford the title of Grand Champion for their 2nd competition this season.  According to the MCBA’s Championship Average Scores (CAS) chart, Rockford’s score was the highest posted in the state for Flight I and they are currently ranked in 1st in their division. They are well positioned as they enter the final week if regular season MCBA competition for a prime playing time at state finals on November 4, 2017 at Ford Field in Detroit. 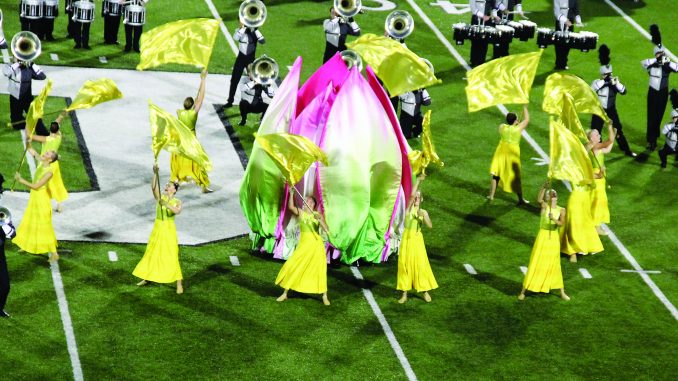 CAS chart rankings determine which 12 bands in each of the four flights will qualify for the MCBA State Championship and their playing order. Flights are based on the total number of students enrolled in grades 10th, 11th, and 12th in each school.  The highest ranking band in each flight is the last to perform.  CAS rankings can change dramatically following the conclusion of regular season competitions on October 28.

The band will conclude their regular MCBA season on Saturday, October 28, 2017 as they compete in the West Shore Invitational hosted by Reeths-Puffer High School at Ted Carlson Memorial Stadium in Rockford. Rockford performs at 8:15 pm and the community is invited to attend.  Tickets for the event are $8.00 per adult and $6.00 for students and seniors.