Until next year when she goes back

Fans of Polly VonEschen, who is known by all her good works around Rockford, not the least of which is the longest run of organization of Start of Summer in world history (she’s been the main organizer for what seems like 100 years), may have noticed her absence from Rockford this past summer.

She was on a much earned once in a lifetime vacation that would be the envy of any traveler, and most especially those who love adventure, fishing, breathtaking landscapes and wildlife.

The trip began with an invite from her brother (Bus) Olen Ettswold, who lives in both South Dakota and Wrangell, Alaska. In Alaska he purchased a former hotel and remodeled the building into six two bedroom and four studio condominiums. He sold all but two, which he saved for himself and for his daughter, and invited Polly and her husband Tom to come on up for a visit with a free stay in the condos. 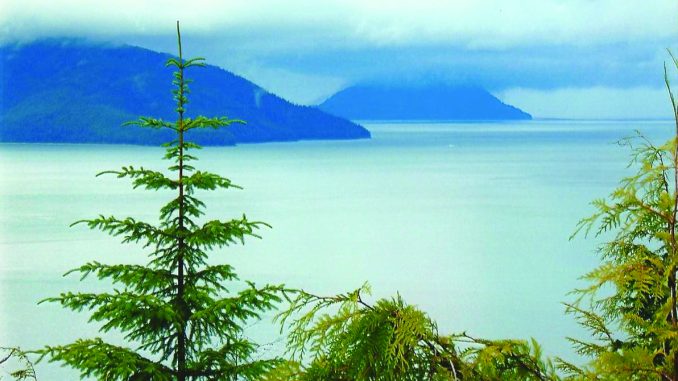 The location is on the Pacific Ocean with an ocean view outside the windows. Polly said the Alaskan wildlife was amazing, with an eagle in trees right out front of the building every day. Each year Bus donates a week stay for the local firefighters fundraiser, and last year the prize went for $4,000. This year he donated a week to raise money for a youngster with cancer. 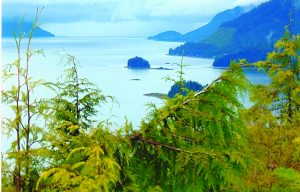 Polly said she hasn’t traveled a lot and was really excited about this trip, which she would have counted high on her bucket list of places to see. She left July 30 and came back August 9 and managed to pack a whole summer’s worth of sightseeing and fun into the short period of time. 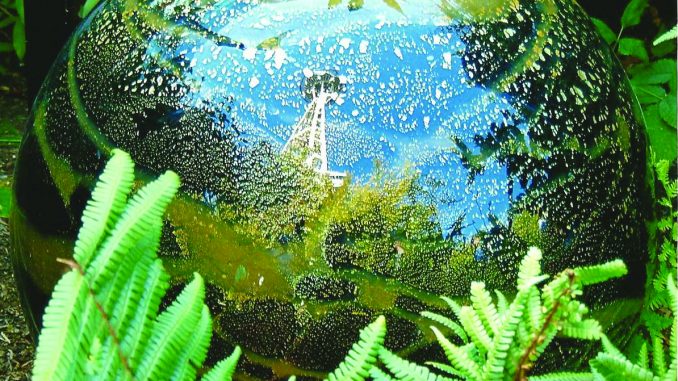 The trip began with an Air Alaska flight from Detroit to Seattle, where she and Tom put in some quick sightseeing. They chose to visit a Chiluli exhibit in the shadow of the Space Needle in Seattle. The glass artist is world renowned and ironically, is among the artists featured here in our own Meijer Sculpture Gardens. Looking back at her pictures of the exhibit, she pointed out the reflection of the iconic needle landmark on the surface of the glass.

Highlights of the trip were the daily fishing trips  out to pull traps for dungeness crabs and halibut. Polly said the area features lots of islands and a trip out fishing takes a good amount of time just to get out where the fish are. The landscape on the trips was breathtaking. At one point they passed a ship tipped on its side on the rocks of an island.

The nine person crew of the Indecisive were in the boat and the Coast Guard had sent a doctor to the ship to check on everyone’s physical wellbeing. She said they could hear the Coast Guard chattering about the wreck on the radio. Polly said they never found out what had happened to ground the ship or how it was able to be righted off the rocks. 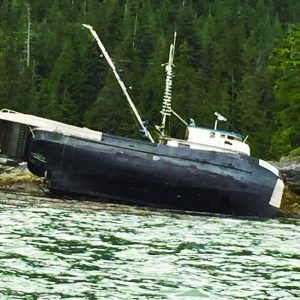 The part of Alaska that Polly saw was filled with snow covered mountain ranges. Weather was fifty five degrees and rainy. She said the state is more temperate than most people realize, and stays in the range of forty degrees even in winter and without much snow.

She said it is pretty easy to fly to Alaska from the Grand Rapids area. There is an Alaskan Air service out of Indianapolis and Detroit. Her trip was a two parter with the stop over in Seattle and then a three hour flight on up to Alaska where she arrived in Wrangle, half way between Ketchican and Juno.

She said the fishing trips included pulling crab pots for the Dungennes crabs. Only native Alaskans can fish for king crab, but the crabbing was very good. As many as eight crabs were in each pot. The fishing was good too. Her husband caught one that was so large it still dragged on the ground when they held it up for a photo. Each fish is formidable, and the keepers have to be killed with an arrow before being brought on the boat or they can bite badly enough to take the skin right off a finger. 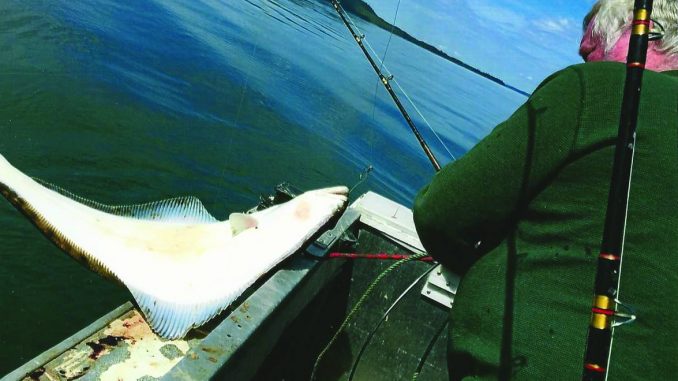 They brought in plenty of keepers, and the ones too small are called hens. Someone on the boat caught one so small Bus said it wasn’t even a hen, but an egg. The fishing and free condo stay made the trip affordable, and many people fly up to fish and hire a guide. It can be very expensive. 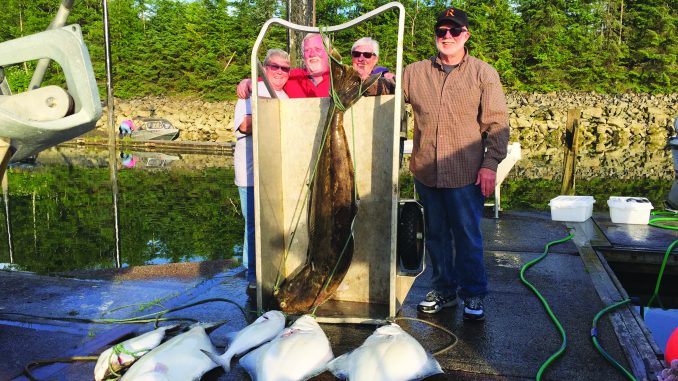 “This was perfect, we didn’t have to pay for a hotel or a guide,” Polly said. One tip to anyone who decides to head out on an Alaska trip of their own, it is possible to bring back the seafood you catch while on vacation. Polly and Tom froze the fish and crab and vacuum packed them. They brought the fish to the airport in an opened box and transferred the box of frozen crab and halibut to the airport freezer in Seattle.

By the time they were back in Rockford, the fish was all still solidly frozen and they have been enjoying it ever since. She said they only half cook the crab before freezing and finish cooking it here at home so it is exactly like fresh from the ocean crab. If you fly Alaskan Air, it is easier yet as those planes have freezers on-board just to accommodate travelers returning with perishable food. 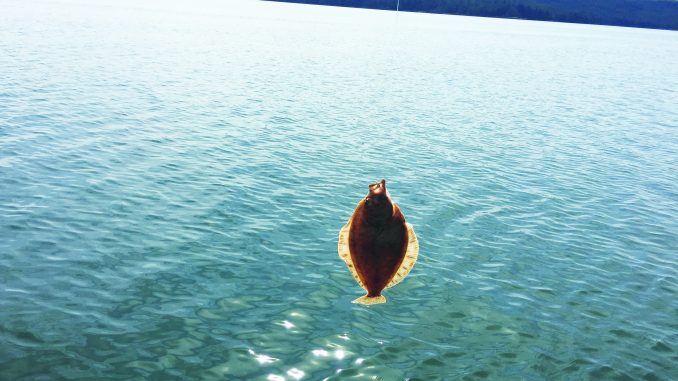 “It was perfect,” Polly said of her trip. “It is definitely on the top of my to do list.” Two items on the wish list were not quite accomplished, but almost. She and Tom hoped to see whales and bears while up in the great north. They did see a tail fin of a whale while out on the fishing boat, and saw the back end of a bear disappearing into the forest. “We saw a whale tail and a bear butt,” she laughed.

It was definitely a once in a lifetime trip for most folks, but when you have family up there, it makes the journey easier. “We will definitely be going back next year.” 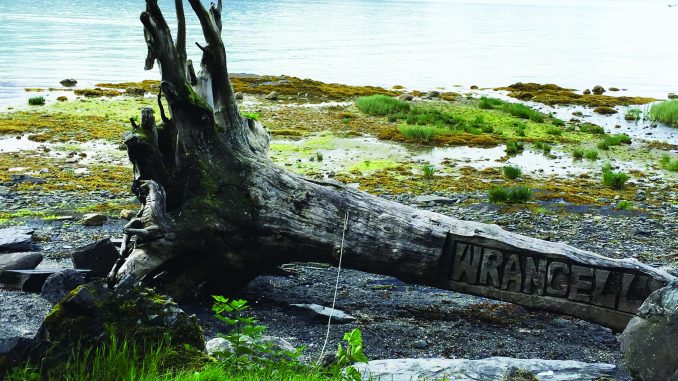 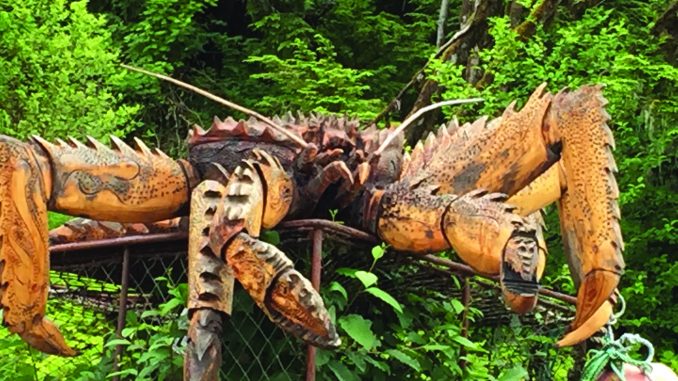 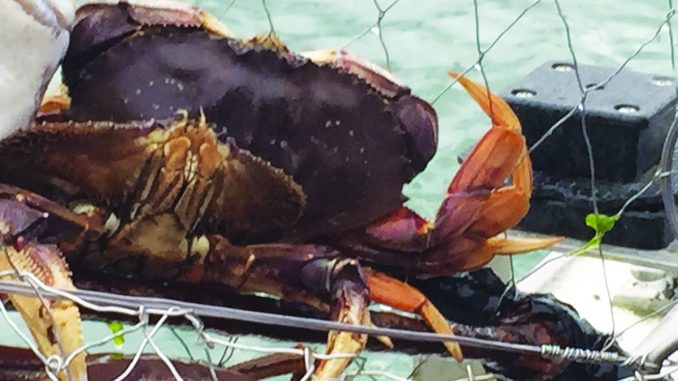