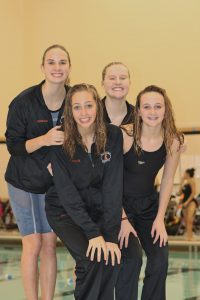 In 2016, Rockford’s girls swimming and diving team capped off a four-year long run of OK-Red dominance by taking the Division I state championship.

The fifth-ranked Panthers flexed their muscles in the battle of state powers, posting a total of 488 points to best fourth-ranked Rockford’s 446.5.

The meet was blazing fast, with 10 new pool records, six new conference meet records and one Rockford school record set. Some of the winning times would be among the top-10 all-time performances at the Division I state meet, a list that includes multiple former Olympians.

“We had a lot of momentum coming in to the finals, and still had some halfway through the finals, but it didn’t go our way at the end.”

The Rams were within striking distance most of the meet, but held the lead just once, 275.5-273 after the 100 freestyle. Rockford edged West Ottawa in consecutive events to recover from an early deficit and take the lead.

The Panthers held a 24.5-point lead going into the 200 freestyle relay, but the Rams were nipping at their heels. Rockford needed to make a move, but the 200 freestyle relay was a reflection of the meet. After a close start, Rayburn, Gamm, sophomore Sam Knepper and Kraus forced their way back into the race only to get out-touched at the end. West Ottawa set a new conference and pool record of 1:35.34, nosing out the Rams, who finished second in 1:35.41.

“It was really tough for the senior class this year,” Parks said. “It’s hard to follow up a state championship team and compete at the same level. They were really hard workers and phenomenal leaders.

“This senior class has been great and I’m really going to miss coaching them.”

Rockford closed the meet out in style, with Knepper, Folcik, Rayburn and Kraus setting a new conference meet record (3:29.21) in the 400 freestyle relay.

The OK-Red Conference is loaded, with five teams finishing in the top 20 at the Division I state meet last season, and each of those schools placing at least third or better in an event at the state finals. Despite the depth, Rockford’s top finisher managed no worse than third in any event, winning three and placing second six times.

“The state finals is an entirely different meet,” Parks said. “It’s all about the top swimmers. Depth matters less. We’ll try our best and see how well we can do. Farmington Hills Mercy and West Ottawa are tough.”