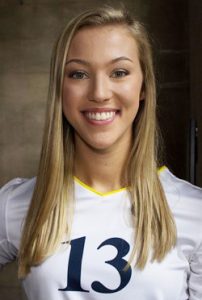 The AVCA makes its selections from student-athletes in the NJCAA Division I, II and III.

“Kendra has worked hard to improve all facets of her game so she could become a great college outside hitter,” he said. “She has grown and matured throughout the season, earning the trust of her teammates in clutch situations.

“Kendra earning All-American status is not only a great individual accomplishment, but a great team accomplishment as well. Each player in our program has pushed each other to become better every single day.”

DeJonge, an outside hitter, powered a potent Raiders offense all the way to the Region XII, District F finals, where GRCC fell to eventual national runner-up Owens Community College. The GRCC Raiders had a 27-3 (16-0 MCCAA-West) record and a No. 3 national ranking this fall.

At GRCC, DeJonge is working on an associate degree in business. While she had worked with Coach Will as a high school player, she wasn’t sure she wanted to attend a two-year college.

“After being at GRCC for a full semester now, I would never go back on my decision!” she said. “Going to GRCC was the best decision I have made because I am receiving the same education as a student at a four-year university for a fraction of the cost.”

DeJonge plans to transfer to Grand Valley State University for a bachelor’s degree in business administration and pursue a career as a personal financial advisor.

Being a part of the volleyball team has been a highlight of her first semester, she said.

“Coach Will emphasizes making games and practices fun — something the team wants to be at rather than a task we are required to do,” she said. “My team and I are very close, and I have already created friendships that will last a lifetime — and I couldn’t be more thankful.”

Grand Rapids Community College has been offering educational opportunities in West Michigan for more than 100 years. Established in 1914, the college offers degree courses, certification and training programs, and workshops and personal enrichment classes. Offerings are held on GRCC’s downtown Grand Rapids campus, and at several locations throughout Kent and Ottawa counties, as well as through distance learning.