Milestones of success, business innovation and philanthropic efforts were recognized Friday, January 19 at the Rockford Chamber of Commerce’s annual awards ceremony and dinner. The event was held at the newly renovated banquet facility at Blythefield Country Club with nearly 150 community, civic and business-people in attendance. 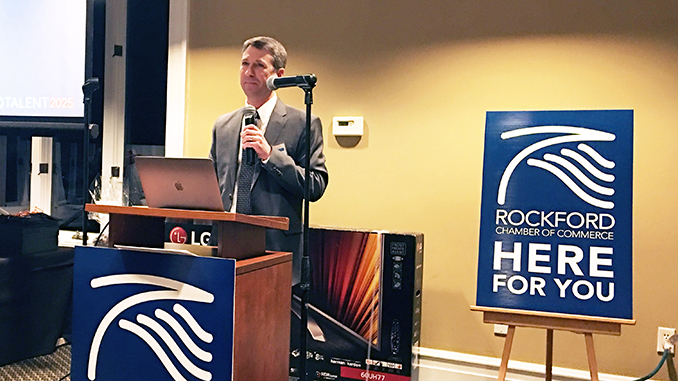 Following a networking hour filled with delicious hot hors d’oeuvres and a great spirit of camaraderie, a dinner including beef tenderloin, baked chicken, baby asparagus, potatoes and salad was enjoyed.

Dr. Michael Shibler of Rockford Public Schools and member of the Chamber Board of Directors introduced the evening’s speaker, Kevin Stotts of Talent 2025, a catalyst group consisting of over 100 CEO’s with the goal of making West Michigan a top 20 employment region by 2025. Stotts spoke at a career night presentation to over 1,000 students and parents of middle and high school students at Rockford High School earlier this month.

Stotts noted that there is strong job growth in West Michigan and that more than 25,000 jobs have been added in the region since 2000, more than making up for the losses during the “Great Recession” of the last decade. The unemployment rate in Kent County is currently 3.2%, lower than both the State of Michigan and the
national average.

He warned, however, that those numbers were somewhat misleading. While the
unemployment rate for those with a bachelor’s degree or equivalent such as technical or mechanical certification in West Michigan was 2.9% the rate jumped to 12.2% for those with less than a high school diploma. He stressed the necessity of education in a changing economy. Stotts congratulated Rockford Public Schools for their 4–year graduation rate of 92.1%, compared with 79.7% statewide and 79.1% for the Kent ISD.

Stotts also noted that West Michigan is projected to be the fastest growing region in the state through 2024, adding nearly 73,000 jobs for almost 10 percent growth. This level of growth outpaces the east side of the state, but also the state as a whole and the United States. However, employers are having to dig deep into the labor pool to find qualified candidates, as many have barriers to work including a lack of education and skills, transportation, and child care. These issues must be addressed to create a truly vibrant workforce.

Stotts spoke about findings that Talent 2025 discovered through a series of business leader focus groups:

Stotts told Chamber members that it is important for them to have a talent strategy, invest in people and build partnerships with groups like Michigan Works, Discover Manufacturing and West Michigan Tech Talent.

After dessert, the business portion of the meeting began at about 8:15 p.m. and adjourned about 90 seconds later. Introductions of the board, Kris Grey was thanked for her many years as recording secretary for the Chamber board and Chamber standing committees were made. Then, the meeting commenced with one of its most anticipated segments, the Annual Year in Review.

Last year, we joked that Jeff Lewis of Fluis Inc’s middle name is “audio visual.” Unfortunately, this year a bad cord shorted out the slide presentation. Nevertheless, Lewis, Chamber executive director Linda Southwick and event coordinator Megan Dean were up to the challenge and delivered their usual entertaining presentation.

Lewis started off by referring to himself as the poet laureate of the Chamber – self-proclaimed, then launched into a series of Dr. Seuss–like poems of stories taken from the Squire that recapped the past year, including new businesses, school successes, the arrival of new city manager Thad Beard and a 42–second recap of less–than–happy news called, “We Didn’t Spin the Squire,” set to the tune of a Billy Joel song. His poem on people and businesses departing last year included the Sweetheart Splash and Neil Blakeslee, who retired at the end of 2017. “But we bet that he isn’t done yet,” rhymed Lewis.

Attendees played a bingo–style game called “Revuo” in which members listened for Chamber statistics, then circled the corresponding numbers on their cards. Statistics included 138 booths at the Rockford EXPO, three $1,500 scholarships awarded to Rockford High School seniors, The Sweet Tooth celebrating 100 years in business, Great Northern Trading Company at 40 and Aunt Candy’s Toy Company at 25, the 5,000 people at the Santa Claus Parade, and the $15,855 in Rockford Cash sold in 2017.

City Councilman Terry Konkle won one of the two “Revuo” prize packs which included a “Rockford’s Got This” t–shirt and $25 in Rockford Cash.

Linda Southwick talked about the new Chamber slogan, “Here for You,” and the importance of participating in networking events that the Chamber holds throughout the year. “We connect businesses with the local community, help build personal and professional relationships, give opportunities to learn best practices and put you right in the middle of people who know what’s going on in Rockford,” Southwick said. “Everyone in the room, every member of the Chamber staff, every volunteer on a Chamber committee and every Chamber member is ‘here for you.’ She also complemented Megan Dean for boosting social media efforts on Facebook and Instagram, mentioning that Megan had also convinced the Chamber to recycle the Facebook posts that they had been keeping in binders in the office.

Megan Dean said it was exciting for her, as a new member of the Chamber staff, to get to meet the many new businesses that are learning about the Chamber, like she is. She announced this year’s Chamber ribbon cutting celebrations that included Vibrant Life Chiropractic, Haven Creek Flowers and Finds, Rockford Pediatrics, North Kent Connect, LA Miller, West Michigan Collision and the Meijer flagship store renovation.

Recognitions included a special Community Service Award of Distinction presented to Polly VonEschen for her years of service to the community. Presenter Sandy Stanton from ChiroHealth Rockford said, “It’s hard to find an organization in which she has not provided service,” and added that she has also been a successful business owner twice, first with Baskets in the Belfry and second for her confectionery business, Polly’s Passions. “Which happens to be one of my passions, too,” joked Stanton.

The Networker of the Year award went to Joyce Romancky from RE/MAX United, who attended 23 Chamber events in 2017. The Volunteer of the Year award was presented to Loren Brown of Innovative Sound Solutions. Chamber A-Team member Blaine Kellermeier said, “He volunteers his time, talent and treasure to the Chamber at the Annual Meeting, Community Expo, Golf Outing, Harvest Fest and Discover a Rockford Christmas. He is a member of the A–Team and on the leadership team of the Chamber Network Circle.” He added, “At Harvest Fest, when we lost our big screen projector supplier for Movie on the Rogue, his company bought a projection system and set it up for the event at no charge.” Plus, said Kellermeier, “he always brings a box of donuts to Chamber meetings.”

The New Business of the Year award winner was chosen from a crowded field of qualified candidates, including Bier Distillery, Bridge Street Burger Shack, Cedar Springs Brewing Company, Plainsong Farm, Ramona’s Table, and the Rockford Cheese Shop. Loren Brown presented the award to Bridge Street Burger Shack, saying, “In the short period of time they have been in business, this winner has become an upbeat and positive voice in the community.”

For Business of the Year, 2016 winner Kim Neveau from Macatawa Bank reminded the audience that this award of distinction “best Exemplifies the Rockford Way.” The winner is a business which creates jobs, supports the Chamber, offers talent and time and collaborates to give back to the community.

“This business has been a member of the Chamber since 1995. They have served on the Chamber board since before 2003.,” said Neveau. She then added, with a smile, “Their storefront is almost as bright as its owner’s smile and personality,” and awarded the Business of the Year award to Candy Lancioni of Aunt Candy’s Toy Company. In an emotional acceptance, Candy reminded the Chamber members in attendance to remember how lucky they are to live and to raise their babies in Rockford.

McGovern thanked the Chamber members and staff for the opportunity to serve as Chamber president for the past two years as the meeting came to a close.