Residents had three hours to ask questions to Plainfield Township officials the night of Monday, January 29 in a town hall meeting held at Northview High School. The topic was contaminated groundwater and PFOS chemicals linked to Wolverine Worldwide and a now closed state landfill on East Beltline.

Three tables were set up with different township officials answering questions one on one from residents. Included in the lineup were Don Petrovich, operator of the township water plant, Rick Solle, Department of Public Works Director, Doug VanEssen Township Attorney, Mark Prein, of Prien and Newhoff, engineers for the township and Township Supervisor Cameron VanWyngarden, who organized the meeting.

Plans are underway to extend the township municipal water system northward all the way to Rockford, residents were told. A handout shows two future lines where residents can hook up to the township water. The water currently is testing 6.8 parts per trillion, well below the state accepted level of 70 parts per trillion. However, the township is moving forward with a filtration plan that will remove all PFOS.

Part of the water treatment plant can easily be converted with granulated carbon filters that will remove all PFOS, but an older part of the plant would require significant retrofitting to accommodate the filters. The township is hoping for state funds to cover those costs and does not intend to pass the cost onto taxpayers or water customers. It did recently approve publication of a bond proposal for $25 million dollars.

Wells at Versluis gravel pit have been permanently shut down after PFOS was found in that water, believed to have come from the former state disposal site off the East Beltline Avenue. The township is currently seeking new sites for wells, which will take time and considerable engineering.

Rick Solle said township municipal water meets all federal requirements, but changes are being made to the system because residents want zero contaminants. The water is tested quarterly and tests from December are posted on the township’s website. He was asked who is studying new well sites and said the township and township engineers are conducting that search. Prime spots for new well heads are getting detects for PFOS so the search is moving farther and farther from the treatment plant.

“We are hoping in this year, 2018, to have a site as close to the plant as we can,” he said. The farther away the well is, the more cost there is to obtain the water. “Where ever we put our wells in we have to put in infrastructure to pump the water to our plant. That’s our dilemma.”

He said a proposed $25 million dollar bond is for extensions of the municipal water supply and for treatment filter modifications and will never be charged back to taxpayers. “We haven’t done a bond yet. Our board has approved publishing the bond proposal and payment of the bond would go back to responsible parties.”

“Doug VanEssen has been the township’s environmental attorney for years. He said he is on a different municipal water system which tested at 6.8 to 8 PFAS parts per trillion, which is also considered safe. “One of the advantages of a municipal system is it is consistently at that level.” He was asked if the township already had selected a vendor for filters and said they had. “Only two vendors in the world know how to do this.”

He said Calgon is an experienced vendor who has been at this for 25 years. The granulated carbon lasts six months to two years before needing replacement. It is impossible to know how long they will last until they are installed. “They will probably last two years because we have very low levels.” He said Calgon will manage the filtration “from soup to nuts” and dispose of the used filters.

The state is closely following Plainfield’s issues because other communities are facing these same concerns, VanEssen said. “Because we are the first, we’ll probably have some state funding.”

He said it is not yet known who bears responsibility for which contaminations, Wolverine or Waste Management. “PFOS doesn’t have a ‘Who Made It’ sign on it.”

A resident asked who is the generator of the PFOS and VanEssen said we all have been generators. “I’m a generator, you’re a generator.” He asked if the resident had ever sprayed Scotchgard™  (When Scotchgard™ still used PFOS) on clothes or had carpet with it. He said he used to Scotchgard™ everything, from carpet to furniture. He added that PFOS is not the only inadvertent contamination done, and told a story about an environmental group that collected batteries to protect the environment only to dump them in their back yards.

He said it was beside the point, legally, that Wolverine didn’t know the PFOS was bad. “It doesn’t matter. You own it cradle to the grave.” He added that he had no idea that there were PFOS in the Scotchgard™ he used to use was bad. “I didn’t know I was putting my little toddlers at risk.”

He also said he doubted that the Environmental Protection Agency will commit Superfund money into the closed landfill. “That site is closed.”

A time line for putting in filters depends, in part, on state approval. “The only thing we are waiting on is state approval. You can’t just tinker with water supplies. We’ve got to work past that. With state approval we could have them in next week.”

He also said the technology that allows water testing at parts per trillion allows the detection of other chemicals. Nationwide emerging concerns include micro-plastics from such substances as cosmetics and pharmaceuticals.

He was asked about chromium, which, like iron, is a metal. He said the purpose of removing metals has traditionally been to soften water.

“It’s not comforting. The problem is there is no such thing as clean water anymore.” He said even bottled water is considered suspect by many.

A woman selling her house in two months asked how she could have the water tested to reassure the buyers. “Where can you get an answer about what is acceptable,” she asked. VanEssen said it depends what it is you want measured. If it is lead, another common water concern, “We have no lead at all here.” As far as PFOS, “In two months we will be at zero.”  He said the benefit of municipal water is that it is tested, where well water could be clear in one month and be at 40 ppt in two months. “We are well tested.”

PFOS chemicals, he said, have a half life of three to four years, which means in three to four years, half will have been eliminated from the body. He said he asked about the PFOS he must have exposed himself and his family to in the Scotchgard™ use decades ago. He was told by an esteemed doctor in the field that there are no remaining PFOS in his body from using the chemical in the 1970s and 1980s. He said no experts express concerns at PFOS levels of 6.8, “But we are taking it out anyway.”

A resident complained that it would cost water customers over the years to pay for the replacement filters and he said that could be a community discussion and decision. Maybe people will decide later they would rather have the current PFOS levels in the water than pay for filtration.

He also stated it is unlikely the township would win a case suing over PFOS levels of 6.8 when the actionable level is 70 ppt. “If I go to court I lose that case,” he said. Nonetheless, there are absolutely conversations about suing Wolverine. He said most information about PFOS comes from the east coast where it has been prevalent longer in states like New York and New Jersey. He said Wolverine is paying $20 million to extend water mains for the municipal water system already and maybe will end up paying more.

There are 40,000 people currently on Plainfield Township’s municipal water system, with industrial users in addition to that, many who use more water than homes. 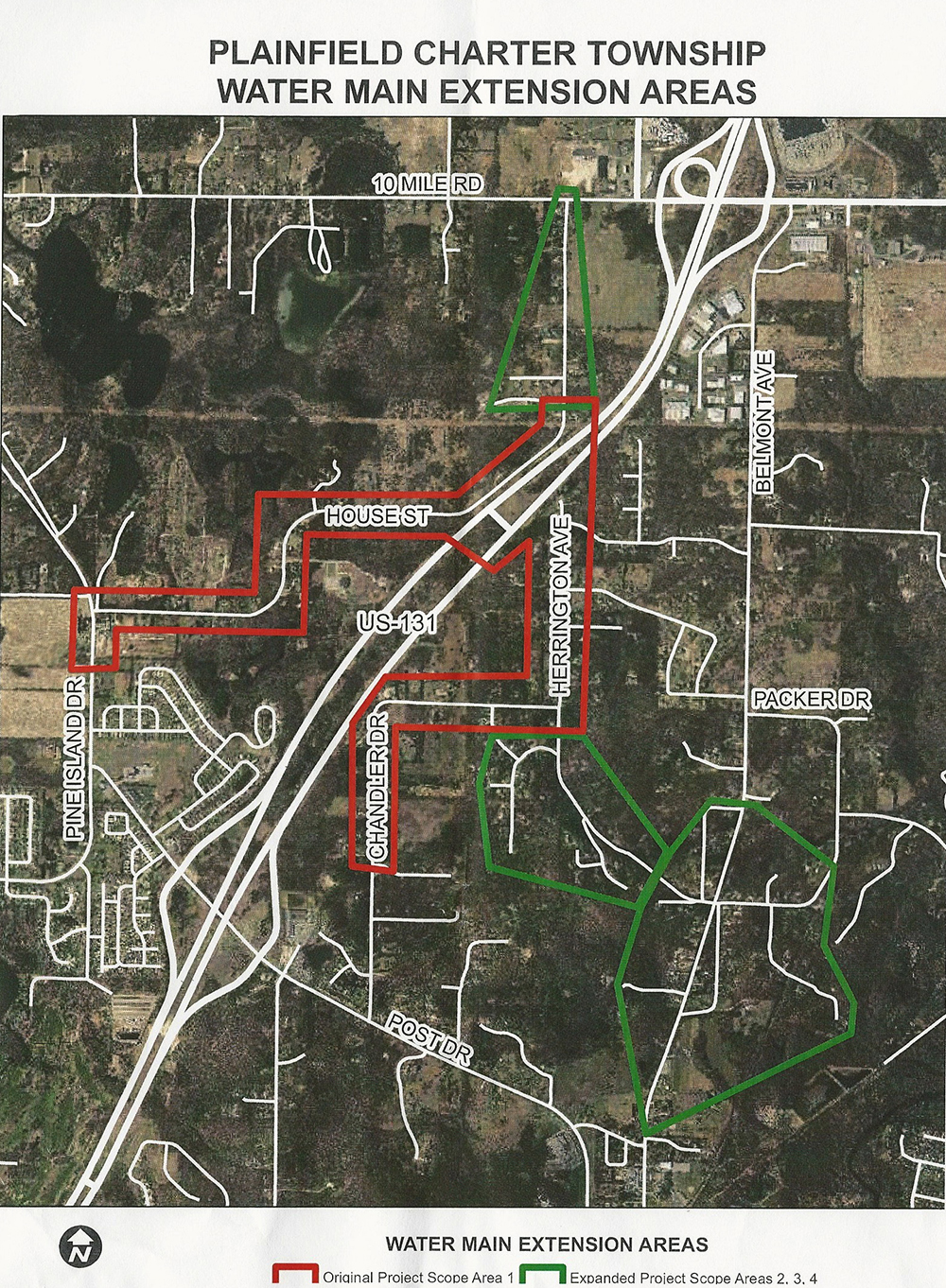