Rockford area native Robert Downes says it was the discovery of hundreds of Indian artifacts on his family’s farm that played a role in his decision to write his bestselling historical novel, “Windigo Moon: A Novel of Native America.” 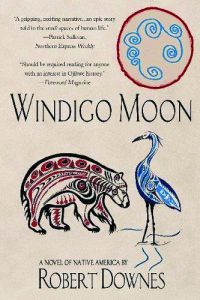 “In the 1940s my father discovered many arrowheads, axe heads and other artifacts of a nearby Odawa village while plowing the fields of our farm,” Downes says.  “I grew up believing that there were once far more Indians in North America than most of us realize and I read everything I could find on the Indians.”

He adds that the Ottawa migrated up the Grand River valley in the 1750s and established a number of villages in the area, including on Wabasis Lake near the Downes farm.  He lived on his grandfather’s farm until the age of three, and thereafter in Grand Rapids.

Purchased in 1909, by Robert’s grandfather, James, the Downes farm was located at the intersection of 9 Mile and Nugent roads on Steele Lake east of Rockford.  Downes and his brother Mike owned the lake and a 99-acre parcel of forest prior to selling most of the property last year.  Mike Downes still owns property on the lake, while author Downes currently lives in Traverse City.

Last September, Downes’ novel of the Ojibwe Indians, “Windigo Moon,” was published by Blank Slate Press, which specializes in historical fiction of high literary quality.  Although the book was only out for four months last year, it made the Michigan Bestseller List for 2017.  The “Petoskey News Review” called it “one of the year’s best,” and it was hailed by “Midwest Book Review” as “A simply brilliant work of historical fiction.”

Downes also won first prize in a 2014 ArtPrize-related contest for the first chapter of “Windigo Moon,” which was sponsored by what is now the Write616 group in Grand Rapids.

“I never intended to write a novel of the Ojibwe, but winning the ArtPrize lit a fire under me,” he recalls.  “My winning entry became the first chapter of my book.”

Set 400 years ago in the Upper Great Lakes, “Windigo Moon” tells the story of a young Ojibwe woman, Ashagi (Blue Heron), whose village is destroyed by ancestral enemies.  She is rescued by Miskomakwa (Red Bear), whose own village is destroyed by diseases spread by far-off European explorers. Over the course of 31 years, the young couple strive to lead their people forward during the devastating years of the late 1500s-early 1600s, an apocalyptic time for Native Americans.

“Windigo Moon” is available at local bookstores and through online booksellers.