On Feb. 22nd the Diving Prelims took place with 19 Divers participating. All three of the Rockford divers, Jaren Smigiel, Austin Hintz, and Josh Vickery went on to the finals which were held on Saturday. In the finals, the top 16 divers advanced. Finishing 5th was Jared Smigiel. 7th place went to Josh Vickery and in 9th place was Austin Hintz. All three divers then qualified for regionals.

On Feb. 23rd the swimming prelims took place with many Rockford swimmers posting a season best time. The top 24 swimmers in individual events advanced to the finals the next day with the top 16 eligible to score points for their teams and the top 8 in the final heat and competing for medals. In the relay races, the top 6 teams advanced to be eligible to score points in the finals. 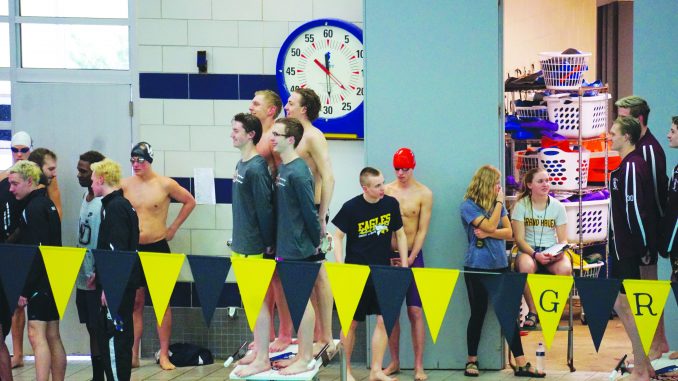 In the 200 yard prelims, the team of Conner Dedert, Paul Sikkema, Jacob Newberger, and Jack Sikkema placed 1st dropping 1.5 seconds from their entry time. In the finals the following day, this same team dropped another 5.2 seconds for a season best 1:35.54 to actually break the conference and 15 year old pool record. However, that was only good enough for 2nd place as the team from West Ottawa outpaced Rockford to take 1st with the now new pool and conference record of 1:33.77.

In the 200 yard Freestyle prelims, Jack Sikkema placed 5th and Zach Burns placed 8th, both with a personal best to move on to the final heat. Logan Lovall placed and Ben Schuchardt both had a personal best and placed 20th and 22nd respectively to move on in the exhibition heats on Saturday. In the finals, Zach Burns dropped another 1.78 seconds to place 5th with Jack Sikkema placing 6th. Both have qualified to swim in the State meet on March 9,10.

The 50 Freestyle prelims saw three Rockford swimmers in the top 8. Kyle Arend placed 2nd with a personal best. Conner Dedert placed 5th. Spencer Nestle placed 6th with a State meet cut and his personal best time. Josh Corder placed tied for 15th. In the Finals, Kyle Arend dropped another ¼ second for 2nd place at 21.47, just .04 seconds behind first. Spencer Nestle swam another personal best at 22.10 for 6th and Conner Dedert placed 7th with a 22.23. All three swimmers move on to the state meet in this event.

In the 500 yard Freestyle prelims, Logan Lovall placed 12th. Logan placed 13th the next day in the finals.

In the 200 yard Freestyle relay prelims, the team of Conner Dedert, Spencer Nestle, Paul Sikkema, and Kyle Arend placed 1st. In the finals this same team dropped over 3 seconds off their prelim time to place 2nd in the event.

In the 100 yard Backstroke prelims, Rockford once again placed three swimmers in the top 8. Jacob Newberger placed 1st with a new Grand Haven Pool and Rockford school record of 51.21. Zach Burns dropped 1.8 seconds off his best time for 3rd place and his state cut time in the event. Conner Dedert placed 5th. James Bird swam a personal best for 10th place and Ben Schuchardt dropped 1.83 seconds off his season best for 17th place. Kyle Dedert dropped almost 2 seconds off his personal best for 23rd place. In the finals, Jacob Newberger improved on his school record by .11 but was just out touched at the end to place 2nd. Zach Burns continued to drop another ½ second for 3rd place and Conner Dedert moved up from the day before to place 4th. All three Rockford swimmers now move on to the state meet in the event.

In the 400 yard Freestyle relay prelims, the team of Jack Sikkema, Kyle Arend, Spencer Nestle, and Jacob Newberger finished 1st. In the finals, this same team had a season best time for 2nd in the event.