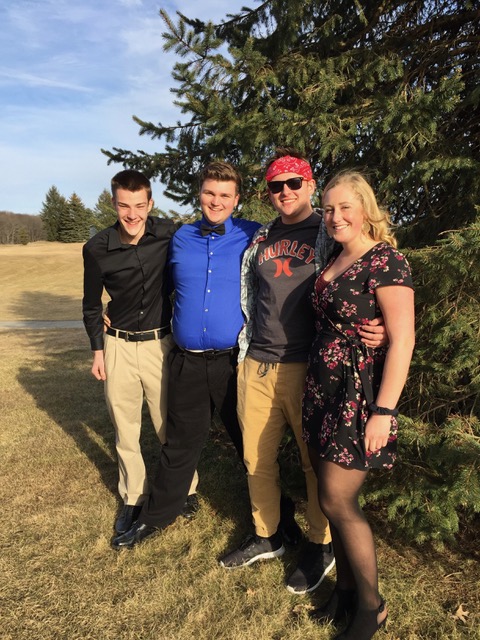 Tuesday evening on March 20, 2018, the Rockford Ski Team concluded a successful race season by celebrating at their annual awards banquet at Boulder Creek Golf Club. Food, fun, and camaraderie was had by the 23 racers, 2 coaches, and their families. The banquet room was decorated with handmade vintage signs that represented each racer in a clever “trail” name. Some of the highlights of the evening included, watching a video presentation of the racers and their race season, the comical “mock election” award ceremony (which induced lots of laughs and spirited goading amongst the racers), and the presenting of the annual racer awards. At the end of the banquet, the racers were given their unique vintage sign to take home as a keepsake. “Go For the Gold” swag bags for each racer included a DVD of the season’s highlights and additional goodies. Additionally, seniors were given a large, frame-worthy, commemorative photo of themselves racing, and a Ram blanket with their name on it. Cupcakes and homemade desserts donated from parents satisfied the sweet tooth in all.

Awards for “All Conference Combined” were given to 4 racers, Juniors Nick Rupert, Karsen Ford, Haley Yeager, and Freshman Maurah Gorney. Karsen Ford and Nick Rupert were awarded MHSSCA All State, Honorable Mention-All State and Academic award was given to Haley Yeager.