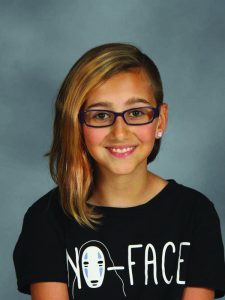 Bailey Blyveis is a 6th grade student from our Community and service team and the daughter of Jody and Matt Botma and Jason Blyveis.  She has one sibling named Gabe as well as a pet gecko named Squishy.  Bailey attended Valley View Elementary and enjoys drawing and animating in her free time.

Bailey would like to attend Kendall College and become an animator one day.  Some of her favorites include her 3rd grade teacher Mr. Oz, eating pizza, the book Dawn of the Clans, and listening to rock music.  Bailey would like to travel one day to Iceland.

Bailey is most proud of her new middle school friendships with Lauren Trimble and Kayla Walters.

The person that she admires the most is her mom because she works so hard for her family. 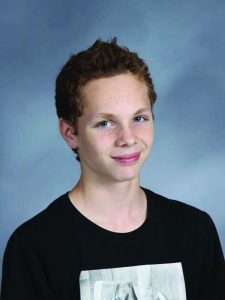 Joe Watkins is a 6th grade student from our Fine Arts team and the son of Trisha and David Watkins.  He has 6 siblings named Miles, Eva, Sam, Shainice, Darris, and Darrell.   Joe attended both Chandler Woods and Belmont Elementaries and is active in student council at NRMS.  Some of his hobbies include running track
and drawing.

Joe cheers for the University of Michigan.  Joe wants to compete in the Olympics and then become a SWAT team member.  Some of Joe’s favorites include teacher Mrs. Ferguson, eating pizza, the movie Patriots Day: Boston Bombing, the book What was 9/11, and listening to music from Imagine Dragons.  Joe would love to travel to Paris one day.

Joe is most proud of his drawings and being the fastest 6th grader and the people that he admires the most are his parents because they really love him and take good care of him and his siblings. 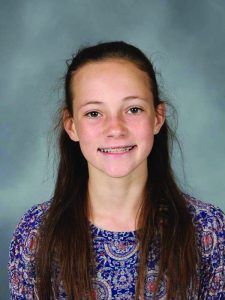 Karys Russell is a 7th grade student and the daughter of Matt and Karyll Russell.  She has one sibling named Jocelyn as well as two dogs named Millie and Timmy and a horse named Ben.

Karys attended Roguewood elementary and is active in Tennis, horseback riding and playing the cello.  She also enjoys sewing and snowboarding.  Karys cheers for Michigan State and she hopes to become either a teacher, a children’s doctor, or a counselor.  Some of her favorites include sewing class with Mrs. Schmidt, eating chicken pot pie, the movie The Greatest Showman, the book Between Shades of Gray, and listening to the soundtrack from Wicked.  Karys would love to go to Ireland with her Nana because they have always talked about wanting to go together.

She is most proud of getting a 4.0 GPA every semester of middle school and the person that she admires the most is her mom because she is so brave, supportive, and would help anyone. 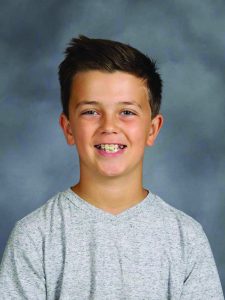 Jonah Kail is a 7th grade student and the son of Matt and Heather.  He has one sibling named Annalise as well as a dog named Finnigan.

Jonah attended Valley View Elementary and is active in basketball and band at NRMS.  He also participates in baseball and youth group and also enjoys fly fishing and cooking.  Jonah cheers for Michigan State and hopes to become either a chef, pro fisherman, or a pro athlete one day.  Some of his favorites include PE class with Mrs. Cuneo, eating barbecue, the movie Sully, the book Mutation, and listening to alternative rock.  Jonah would like to travel to Belize one day.

Jonah is most proud of the diversity of activities that he participates in and the person that he admires the most is Justin Verlander. 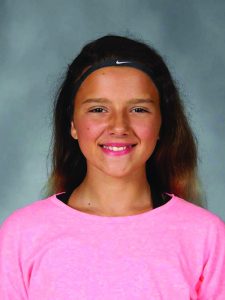 Sydney Taylor is an 8th grade student and the daughter of Jamie and Jason Taylor.  She has four siblings named Shelby, Kaia, Chloe, and Harley as well as a dog named Disel and two cats named Piper and Hazel.

Sydney attended Roguewood Elementary and is active in track and swimming at NRMS.  She is also involved in gymnastics and dance and enjoys art in her free time.  Sydney cheers for Michigan State and would like to become a flight attendant one day.  Some of her favorites include teacher Mrs. Cuneo, eating pizza, the movie Wonder and the book Greetings from Witness Protection.  Sydney would like to travel to Hawaii with her best friends one day.

Sydney is most proud getting the good grades that she does. 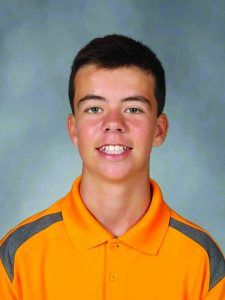 Cam Deuel is an 8th grade student and the son of Brent and Jen Deuel.  He has two siblings named Ryann and Hope.

Cam attended Meadowridge Elementary and is active in football and basketball at NRMS.  He is also involved in Lacrosse and enjoys flying his drone in his free time.  Cam would like to attend the University of Massachusetts and get a job that he likes one day.  Some of his favorites include teacher Mr. Saur, eating pizza, the movie Rocky, the book Diary of a Wimpy Kid, and the song Jump Around.  Cam would like to travel to Hawaii one day.