Last week’s column Had a “Nugget of Rockford History” question using two photos of Rockford as it used to be. Readers were asked to look at the pictures and to tell me what was located there today. One of the photos showed the “Wander Inn” and the other showed a Chevrolet garage with Phillips 66 signs. The second photo did not get included with the other, so I am using it this week. Look it over and contact me with your answer to what is located at that spot today. Readers can still call (616-866-0530) or email (tnjkonkle@hotmail.com) with what is on the site of the “Wander Inn” also. 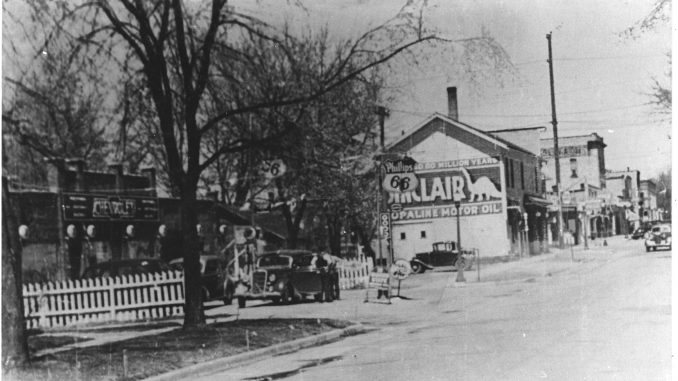 The rest of this week’s column will state some historical facts about Rockford.

1. Rockford became our town’s official name in 1866. Before that  it was called Laphamville.

2. At the time of becoming known as Rockford, the village was east of the river.

3. For a time the Rockford city offices and other services were located in a building where the bowling alley is today.

4. Rockford High School hosted  an invitational relay carnival for Class “C” and “D” schools in 1932. The event featured track and field events and was held behind the school on North Main Street. At that time Rockford had a quarter mile track which was considered excellent. Only traces of the track exist today (2018) and are hard to distinguish.

6. In 1932 the MHSAA Regional track meet was held at South Field in Grand Rapids. That track no longer exists.

7. In the 1932 Regional, Rockford placed third with 21 points. Clarence Blakeslee finished second in the half mile in the meet and Carl Streeter, one of the top athletes from our town at that time, tied for first in the 220 yard dash.

8. Rockford’s first weekly newspaper started in February of 1871. It was called the “Rockford Weekly Register”.

9. Rockford High School organized their first football team in the fall of 1910. They practiced that year but because of lack of equipment and uniforms, no games were played  until  1911.

10. According to the Rockford Register newspaper,  85 students were enrolled in the top four grades in the fall of 1910. Forty of them were ninth graders.

As always, please contact me with comments, concerns, questions, suggestions and corrections. Have a great week!